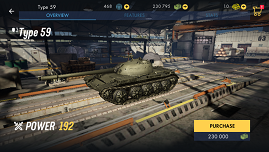 Armored Warfare Assault, a brand new action-packed multiplayer tank game for Android has been just released on Google Play Store. If you take a look at the rating section, then it might change your mind of installing Armored Warfare Assault. Most of the people gave it 1 star states that it’s laggy and not optimized. I have tested it and it works great, graphics are also best. To experience a wonderful action-packed gameplay, you must have a good device because it does not work well on low-end devices. As it is a multiplayer game, it would not be easy for you to dominate the battlefield, but these Armored Warfare tips will help you to do so and the beginner’s guide for Assault also worth reading.

The game starts with a tutorial, it’s a long tutorial and you can not skip it. In the tutorial, you learn about controls, shooting, upgrading, and much more. After it, you can manually handle all the things. Before you start the game, go to settings -> graphics -> set to high for better gameplay. To aim fast and accurate -> tap on menu -> settings -> control -> turn off manual aim control. The automatic aim is good if you are a beginner, you don’t need to manually aim to shoot. It will save your time and you will be able to focus on navigation & firing. Also, see – Best Pokemon games for Android

Tanks are divided into three categories; heavy, assault, and support. You start the game with rank 1 tanks, to access to more features like crew, you have to purchase high-level rank in exchange for cash. Just go to tanks -> tap on a tank to purchase.

Each tank in Armored warfare has different stats, to make it great, you need to level-up and upgrade your tank. Upgrading a tank improves the attributes; damage, speed, mobility, accuracy, reloading, range etc. So if you are not upgrading your tanks, you can not dominate the battlefield. Also, see – Best survival games for Android

Best tank in Armored Warfare: – It is obvious that high-level rank is one of the best tanks. But to get it, you need a huge amount of cash. To earn bucks, you need to win battles. To win battles, you need to upgrade the existing tanks so that you can give the toughest fight to the opponent players.

How to level up tanks? Upgrade tanks?

In Armored Warfare, you can level-up a tank in exchange for currency or by earning XPs. Go to the battle -> be the top-ranked commander of your team and as a reward, you will get bucks, points, and XPs. Leveling up a tank unlocks new upgrades, upgrade it and increase the power of tanks & improve the attributes of tanks. Also, see – Top best arcade games for android

Missions are divided into two sections; random missions and campaign events. On the main screen, tap on missions -> current -> and complete all to get rewards; currency, bucks. Go to campaign section -> tap on the start button to start the mission. It is one of the best ways to earn free rewards; bucks & currency.

In this multiplayer game, you play as a team against other players from around the world. The player who has more score points at the end of battle gets the top rank and highest reward. So to get more bucks and XPs, you need to get more points than other players on your team.

How to earn more score points?

Score points allocated to the player on the basis of damage you have done on the battlefield. The player who damages more earns more score points. So aim & fire, damage the tanks of other players and earn more. But don’t forget that victory will boost your reward, always play for the team. The contribution is always appreciated. Also, see – Top new Android games 2018

Armored Warfare Assault is one of the best tanks games for Android and the battles are too addictive because of 3v3, 8v8 team matches. But you might fail at the start because of complex gameplay: – these tips, cheats, and strategy for Armored warfare assault will help you throughout the game: –

At the top right of the screen, you can see a mini-map. Red dot highlights enemies, blue dot highlights your team players, and orange dot highlights your position. Tap on the map to magnify. Your first task is to follow team members. If you are near a point(at the start), check enemies location “where are they”. Don’t go alone, escape the point if more than two tanks are near, attack on tanks to earn points[would be great if you target a specific tank], keep moving, avoid their attacks, and dominate the battlefield. Also, see – Best platform games for Android

If your tank has been destroyed, then it takes few seconds to go back into the battle. You might get the options; where to start(A, B, C point or main base). At the left side, look at the map and check the enemies, choose the best place and respawn.