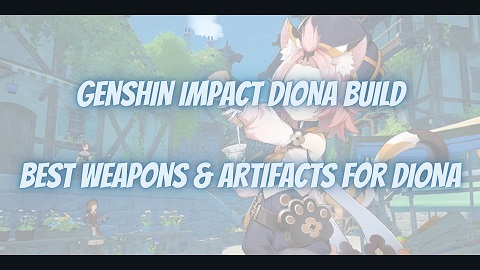 Diona is the new character in Genshin Impact that does AoE Cryo DMG and creates barriers with the abilities she possesses. She was released in November 1.1 update. Her main strength is “supportive skills” such as healing and creating a shield that absorbs damage. In this post, we have shared recommendations on “Diona Build” and the best weapons and artifacts for her. So let’s not waste any time and get straight to the build info:

A few things to note down before you proceed to the build: –

These are the recommended weapons for Diona that boost energy recharge and help you unleash ULT skill: –

⇒Sacrificial Bow: equip this weapon to Diona in Genshin Impact to boost energy recharge(6.7%). Bonus Effect: After striking a foe with an Elemental Skill, the skill has a 40% chance to end its own cooldown. The effect triggers only once every x30 seconds

These are the best-recommended artifacts for Diona that empower her abilities: –

So that’s all we got in this post on the Genshin Impact Diona Build guide: skills, artifact, weapon overview! NOTE: This article is in development.