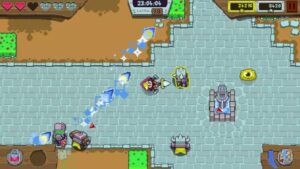 Dizzy Knight is currently in alpha stage/beta on Google Play Store. In this game, your goal is to reach the end and claim the Spiral Throne. It’s a great classic game with full of action gameplay.

There are two characters available to play with – Circe, Crispin. You start the game with a tutorial in which all abilities of your hero is unlocked.

One the tutorial finished, you get ready to play other game modes. Three game modes are present in Dizzy Knight game – Campaign, Advance, And Endless.

At the beginning of the game, only campaign mode is unlocked. The player can unlock other game modes with coins.

What you have to do in Dizzy Knight game? 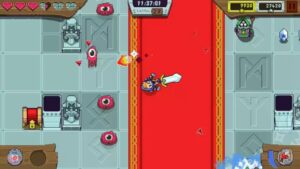 You have to slay down all monsters, tons of monsters are featured in this action game. To slay down enemies, hit them with your sword but don’t let them hit your body otherwise you will lose your health. 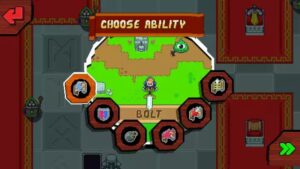 You can unlock abilities of your hero with coins. Abilities such as bomb, teleport, shot, blocked, and dash. You can switch to any ability anytime[If all are unlocked].

Coins are necessary to unlock these abilities, other game modes. Just slay down your enemies and grab the coins. Complete Quests such as Score 10,000 in a game, shop potion, and use potion etc.

You have to protect yourself from enemies, to save health for later when you will fight against the boss.

Dizzy Knight is a great offline fantasy action game with tons of monsters, abilities, power-ups, and bosses. Can you reach the end and claim the Spiral Throne? It’s currently in beta and may be unstable. You can get it here.