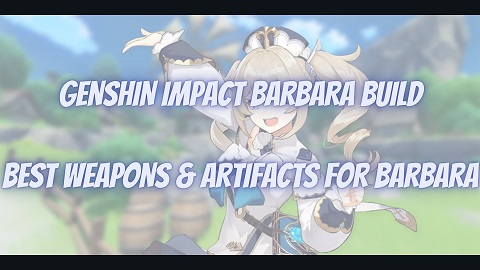 So who is Barbara? A 4-star character in Genshin Impact that’s known for her healing knack and inflicting Hydro DMG on the non-friendly units. You may not see her in the best characters list – but she is quite a decent character with DMG and healing skills; could be a great utility character if you build her wisely!

If you have got her from the wish gacha summon or as a reward(AF 20) and have no idea of her performance in the different-different game modes, then this post is for you. In this Genshin Impact Barbara overview, we have shared her brief evaluation, skill info – also, the suggestion on weapons and artifacts that you can use to improve her performance in the battles.(Also, see – Genshin Impact Codes)

Do note that it’s not compulsory to use the shared build; you can use other weapons and artifacts as well if you think Barbar performs well those sets. Now, let’s continue to the main content: –

A few things to know before you check out the build for Barbara: –

So that covers the Genshin Impact Barbara Build Guide: skills, overview, best weapon and artifact for Barbara, and more!