Genshin Impact Bennett Build Guide: how good is Bennett’s performance in Genshin Impact? What’s the best weapon and artifact for him? Find out in this overview! 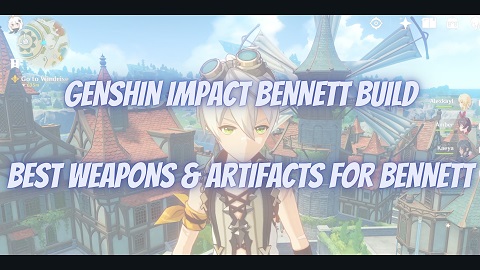 Bennett is a 4-star grade character unit with damage abilities in Genshin Impact. As per the current version of the game, Bennett is among the top-tier characters in the game. You can check the character tier list here. In this Genshin Impact Bennett build guide, we have posted the recommendations on the weapon and artifact that suits and boosts Bennett’s performance. Also, we have posted his skills and talents info!

1.) The Flute – (obtain from gacha). Why this weapon? In our opinion, this is a perfect weapon to scale up Bennett’s ATK; thanks to its base effects, it will empower the base ATK and ATK power of the character who equips it. And, with its skill, that character can gain Harmonics that trigger ATK DMG to enemies around.

2.) Skyrider Sword(obtain from gacha or by defeating monsters/chests). Why this weapon? With this weapon, you will be improving the energy recharge for Bennett. And because of that, you can swiftly unleash the elemental burst. Also, because of its skill, the character gets ATK and movement SPD bonuses.

1.) Berserker – one of the popular artifacts in the game that can scale up CRIT Rate.

2.) Gladiator’s Finale – to empower the ATK stats of the character.

3.) Noblesse Oblige – another one of the popular artifacts in the game that’s commonly used to empower the elemental burst ability of the character; improves DMG and also buff the party members’ ATK

4.) Resolution of Sojourner – this artifact increases the critical hit rate by the charged attack. Also, improves the attack power