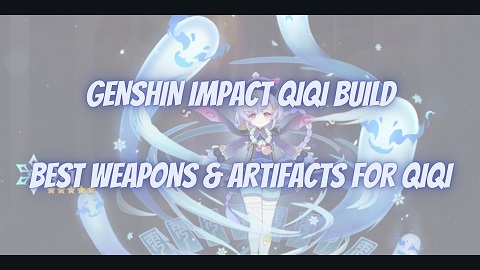 Second, she belongs to the healer class and possesses a healing ability that can restore the health of friendly units. Additionally, she has great DMG skills; uses the sword to crush enemies.

In this Genshin Impact Qiqi overview, we have shared her build; best weapon, and artifact that you can equip to her for further power boost or performance boost. Also, we have shared her skills, evaluation in all the game modes, and much more. So, without any further ado, let’s get straight to the content!

A few things to know before you check out the build for Qiqi: –

(1)”Skyward Blade“. How to get: Gacha. This weapon will boost the healing of Qiqi; by boosting the energy recharge, Qiqi can heal faster and better!

(2)”Prototype Rancour“. How to get: you can forge it with a white iron chunk, crystal chunk, and prototype. Use this weapon to empower the PHY DMG and ATK of Qiqi.

(3)”Sacrificial Sword”. Effect triggers when damaging the enemy with the elemental skill – outcome/effect; chances to end its own cooldown

(4)”The Flute” – when equipped with this weapon, normal and charged attacks have chances to gain a harmonic; stack 5 to inflict DMG to surrounding enemies

So that covers the Genshin Impact Qiqi build guide; featured with skills, talents, and other information.