Genshin Impact Venti Build Guide: read on for Venti’s evaluation, skills, and other information like best weapon and artifact in this Venti build overview. 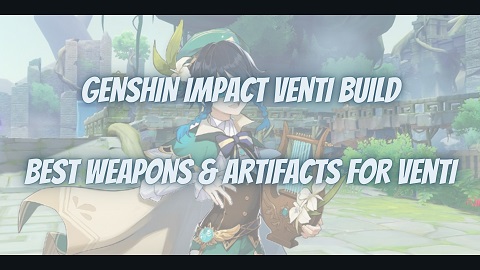 Venti, one of the 5-star grade characters in the Genshin Impact game, belongs to the support role and possesses great base stats, abilities, and talents. With the right weapon and artifact, she can truly shine and help you in all sorts of game modes.

Speaking of the acquisition, players can get Venti from wish gacha by spending the AF on the banner featuring this character.

If you want to get this character in the early/very beginning of the game, we would suggest rerolling. You can read the reroll guide here.

In this article, we have shared Venti’s evaluation/ratings in all the game modes, skill info, talents info, and the best build for her; best weapon, and artifact for Venti in Genshin Impact.

So, let’s not waste any time and get straight to the main content!(Also, see – Genshin Impact Codes)

The best weapon for Venti in the Genshin Impact would be “Elegy for the End OR The Stringless”.

Elegy for the End details: –

You can unlock the first two listed talents at ascension levels 1 and 4 respectively. The third talent is unlocked automatically.

So that’s all we got in this post on the Genshin Impact Venti Build guide: skills, artifact, weapon overview!