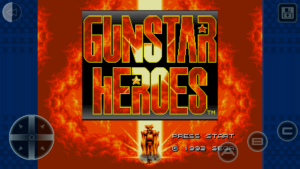 Every month Sega release old classic games for mobile users under “Sega Forever” series. Gunstar Heroes Classic is the new game in this line up that has been just released on Android.

In this game, your goal is to defeat Colonel Red’s Empire Army. You can play Gunstar heroes classic alone or with your friend in 2p mode.

After it, you have to choose a specific weapon before you start the fight –

In Gunstar Heroes Classic, there are four game worlds with different gameplay –

All game modes are unlocked. It is a free game like other games of Sega Forever Series. But you can pay for ad-free gameplay and save feature.

You can save the game progress by connecting it to Google play games account. The internet is required. For the offline saving feature, you have to pay some bucks.