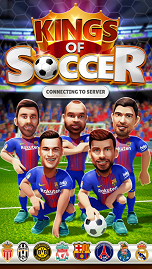 King Of Soccer is a new fun soccer game for Android in which the player battle against other players from all over the world and improve the soccer team to perform well in matches. Here’s all you need to know about the King Of Soccer game; Overview, Guide, Tips, Cheats & Strategy for King Of Soccer game

Hugo Games, the creators of Cristiano Ronaldo Kick’n’Run game has recently released a new soccer game for Android “King Of Soccer”. The game features multiplayer football matches in which your only task is to score goals more than the opponent’s team. Let’s take a look at all the things; King Of Soccer game.

Get Started – King Of Soccer 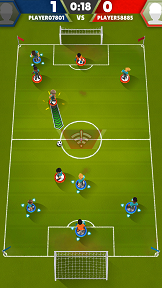 The game starts with a tutorial in which you learn about the basic of the game; how to play King Of Soccer game, how to tackle, and how to smash the ball into the back of the net. You start the game from training league, progress fast to play next high-competitive leagues. The player who has more points at the end of the match wins the match and pick-up rewards.

In this turn-based soccer game, both the player plays their turn by choosing any one of the team players out of all. You can choose anyone to hit the ball, just hold down your finger on a player, pull, make a perfect angle, and release. After it, opponent will play his turn, you can point out the angle where he/she is going to release the ball, you can tackle his/her move by moving your player(just hold down your finger on a player), point out the opponent’s angle, pull, make a perfect angle to tackle his/her move, and release. That’s it. This is all that you have to do in King Of Soccer game. Play your turn, defend or tackle opponent’s move, pass the ball to your team player, and score the goal.

Before you start the match in King Of Soccer game, you can swap your team members with others in your squad. You just have to tap on a team player, choose swap, then replace him with others or if you have purchased or got a player in card and you want to add him to your team, head to squad section, then tap on the player’s card, choose swap and replace it with existing card/player. That’s it.

Use your striker to smash the ball into the back of the net. Mid, use midfielders to get the ball into position and use your defenders to block attacks.

Cards of the player can be used in upgrading, improving the stats of the player. For instance; stamina card restores the players’ stamina and you will get the better result in the match. To apply, tap on a player’s card, then select info, and use the booster or upgrade it.

It’s important to improve the stat; defense, power, tackle move, and stamina. So you should upgrade your team player for the best result. But how to upgrade a player in King Of Soccer game? You need player cards, once you complete the requirements(4 or 5) number of cards, you can upgrade your player to next level. Upgrading cost you soccer points/coins. These points can be earned by getting victories in the matches.

Chest or packs can be collected by getting victories in the matches or completing the tasks like score ten goals. These packs include the player cards, boosters, and much more. You can open them instantly using bucks or buy it from the store. 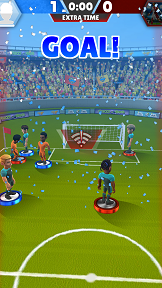 If you are struggling for the victories, then these tips help you and you will be able to get the victory.

Before the match, you should edit your team on the basis of your strategy, place striker near the net, replace the players with those team members who have more power.

Upgrade your players to boos up their stats

After a match, your players’ stamina will be reduced. Restore the stamina using stamina booster cards.

Claim free cards by completing the tasks, get victories and earn free packs, spend some cash(In-Game) and buy card packs.

Closing Words On King Of Soccer

King Of Soccer is a great fun game for Android. It features challenging and addictive gameplay, you should give it a try if you are looking for a simple fun soccer game. Download King Of Soccer – here(Google Play Store).