Description – Knights Age: Heroes of Wars aka Age Legacy of War is a new Android game by JDI Game Studio. Here’s what you need to know about this game

JDI Game Studio has just published a new Android game on Google Play Store “Knights Age: Heroes of Wars” aka Age Legacy of War. This game is currently in alpha stage, works fine for me.

Basic of Knights Age: Heroes of Wars aka Age Legacy of War 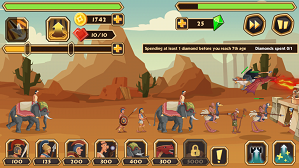 This game is all about the evolution of humans. You start from the stone age, then evolve to Ancient Egypt, Ancient Roman, Present, and the Future. Stone age has different environment while next generation brings new units, attacks, and environment. This game reminds me of Semi Heroes in which you deploy heroes and save trees. 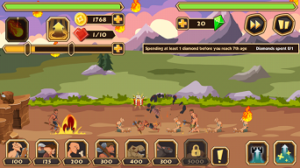 Generals – In generals mode, the objective is to defeat and unlock all generals.

What you have to do?

You are the leader of your army. Deploy your units to attack enemies. Another task is to defend your base.

Base – For each age, you will have a base to train seven types of soldier. Two types of units are locked, spend coins to use them in battle. For hard or insane level, you have to upgrade your base’s security by building a tower.

How to build and upgrade – There are two upgrade buttons at bottom right. First is for the base, tap on it and build a tower. When you have no gold to train units, then the tower will attack enemies. Spend some gold to upgrade security. 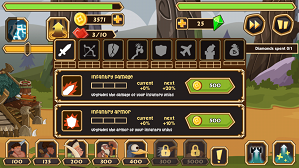 Gold used in upgrading, training of soldiers, and for building the tower. You will get gold by slaying down enemies.

The spell is a special attack. When you think you are in trouble, then you should use the spell to slay down the whole army of the enemy. After using once, it takes few minutes to use it again.

Your units will attack enemies automatically. There is a progress line at the top right which shows your progress. There is another upgrade option at the top right. When you see it is fluctuating, then it means you can now move to next age.

⇒ You strategy should be different according to the difficulty level. For instance: – In easy mode, you should not spend gold on expensive units, while in hard or insane mode, your very first step should be unlocking of powerful units such as dinosaur, dragons, bat etc.

⇒ Don’t forget to build the tower for your base. Tower helps you when you are in the poor situation. Upgrading the tower is an investment.

⇒ Use the spell/special attack when you see your units are failing.

Closing Words On Knights Age: Heroes of Wars aka Age Legacy of War

It is a great game, has several modes which makes it better and addictive. Graphics are also good. Offline mode is a plus point. I would recommend you take a look at semi heroes – Idle RPG because of little bit similarity in both games.