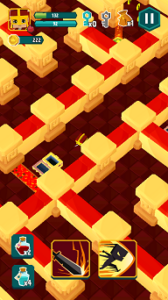 Maze Escape Dungeon Heroes is one of the best RPG Android games 2018. In the game, you play as a Warrior, Witch, Archer, Sorcerer and escape from the dungeon. However, it would not be easy because of hidden traps, obstacles, monsters, and puzzles. Also, you have to find the keys to escape from the dungeon. You choose the right path to follow. Monsters are guarding chests, keys. You fight with each enemy to get these keys and chests. Keys are used to open the locked doors of the dungeon. Chests contain treasury items such as potions, runes, spells, and much more. At the end of the stage, you fight against the powerful monster for the key. 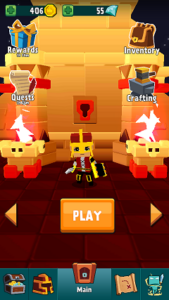 Maze Escape Dungeon Heroes is a beautiful game, has good graphics and excellent gameplay. The hidden traps, obstacles, monster fight, puzzles make the game more challenging and addictive. Offline mode is a plus point. The player gets a decent amount of diamonds at the starting of the game. There is a point and click system, you just have to tap where you want to move. Your hero fight against the monsters automatically. The thing that you have to manage is choosing the right path, right skill to slay down the enemy, avoid traps, and loot. The game is one of the best RPG Android games 2018 and you should give it a try if you love escape games, adventure, and RPG games. 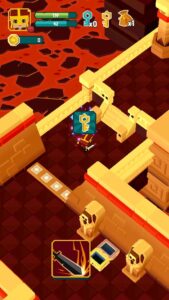 The game starts with a tutorial in which the player learns about several things such as moving of character, using skills, crafting, upgrading, using potions and all that. After the tutorial ends, the player manually handles all the things. It features hundreds of maps, unique and challenging dungeons, many heroes, thousands of skills, and much more. You can simply tap on the play button to start the game or complete all the worlds by completing all the stages.

In Maze Escape Dungeon game, the player has to do these things: –

There are many traps that can damage your heroes’ health in a moment. Traps such as spikes, lava, holes, etc. Beware of these hidden traps. 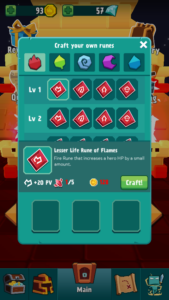 In Maze Escape Dungeon Heroes, you need shards to unlock new heroes. Heroes; Warrior, Witch, Archer and more. Each hero has their own different skills. Warrior use sword to slay down monsters, Archer uses the bow to slay down monsters. Similarly, other heroes have their own skills. To defeat powerful monsters, you need to upgrade your heroes. Level-Up heroes to increase the HP, increase the level of skills to increase the damage. EXP is used to level-up heroes while coins are used to upgrade the skills. The player collects coins, EXP, and all other things by looting the dungeon.

⇒ Improve armor and weapons and increase the statistics of your heroes. Strengthen your hero by ranking up. 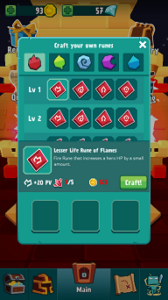 Craft and equip these runes to defeat the monsters. You collect runes by looting the chests. Complete the minimum requirement of runes and coins and start crafting. Once crafted, equip them and go on the epic adventure.

⇒ Go to each corner of the labyrinth, look for chests, loot these chests, and get the runes. 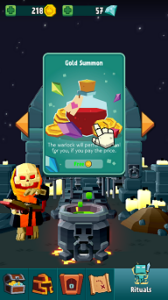 ⇒ Use these potions at the time of fighting against powerful monsters. Use health potion to get HP, use the mana potion to restore mana. These potions are limited, use when necessary.

⇒ Craft your equipment and become one of the best treasure hunters.

⇒ Coins are important. Don’t skip even a single coin. Use these coins in the upgrading of heroes’ skills.

⇒ Beware of traps. If you fall into these traps, your game will be over.