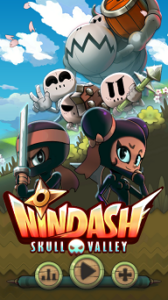 Nindash Skull Valley is an arcade action game for Android in which you play as a ninja and the goal in this game is to defeat skeletons. It features over 90 addictive levels, a bunch of ninja characters and skeletons. Are you ready to smash bones of your enemies with shuriken?

As mentioned above, you play as a ninja and your only goal is to smash the skeletons as fast as you can. If they succeed in crossing the red area(last point), then your health will be reduced. And you would not be able to get three stars. The game is simple yet challenging, smashing skeletons is not an easy task because some of them have bombs and it might affect your ninja’s health. You defeat the horde of skeletons by taping and sliding on the screen and at the end, you fight against the boss.

Defeating the horde of enemies

Before you fight against the boss, you have to defeat the waves of skeletons. You just tap on the screen to move your character; up, down, left, and right. Don’t even touch skeletons who have bombs, keep away from them, dodge them, and save your health.

Defeating the boss at the end

In Nindash Skull Valley game, the player after defeating the horde of skeletons fight against the boss at the end. To slay down the boss in the game, you just have to tap, tap, and tap on him. After it, follow the on-screen instruction. Complete the task to slay down the boss, but be quick. For example; If you get the task of throwing some shurikens, then hold down your finger on the shuriken and throw towards the skull. The player has to complete this task in a fixed time duration.

Get Three-Stars in every game

Getting three stars at every level in Nindash Skull Valley game is not an easy task. If you want to get three stars, you need to take care of these things;

⇒ If even a single skeleton crosses the red area, you will not get three stars. So, slay down all skeletons as fast as you can.

⇒ In Nindash Skull Valley, when the player slays down skeletons, he/she earns points. These points can be increased if you perform combos. To perform a combo, you have to instantly slay down the bunch of skeletons in fewer taps.

⇒ Avoid skeletons having bombs, save your health and get three stars at every level in Nindash skull valley game.

Guardian door unlocks after you complete the first 15 stages of a world. But you must have the minimum number of stars. For instance; To open guardian door in the first world, you need 30 stars. Collect these stars by completing stages.

How to defeat the giant boss in Nindash Skull Valley?

Giant Boss fight is the toughest fight in Nindash Skull Valley game. But you can easily defeat the giant boss by following this tip –

⇒ After attacking randomly, giant boss jumps to the middle and become unconscious for a few seconds. Use this time and randomly attack by tapping on him. At the bottom of the screen, you can see his health. Dodge all attacks, wait for the jump, and play your turn to win the giant boss fight in Nindash Skull Vally game.