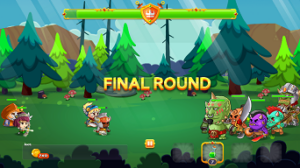 Topebox, the creators of Sky Dancer Run game has just released a new strategy game for Android “Fire Frontier Heroes Of Valor”. Here’s all you need to know about Rise Of Heroes game; Tips, cheats, guide, and overview

Fire Frontier Heroes Of Valor is an Idle strategy type game for Android in which you fight against the evil gangs, recruit and manage a force of heroes, explore dungeons, and become the best team of heroes. Game’s progress depends on the management of resources, the player who effectively use the resources for the heroes will progress fast as compare to those who use resources blindly. Fire Frontier Heroes Of Valor is one of the best strategy & management games for Android in 2018. 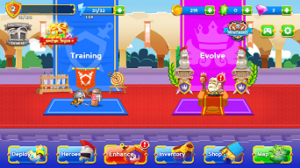 Fire Frontier Heroes Of Valor game starts with a tutorial in which you learn about the basic functions of the game; deploying of hero, training of heroes, battles, and much more. Once it ends, you can manually play the game.

In the beginning, the game is a little bit boring because of low-level fights and action. But after you cross some initial levels, the real action starts. In the game, you have to take care of few things; heroes, training, evolving, recruiting, management of resources, using of items, and many more. It is not an action game because there is an auto-battle system. Your hero attacks, use the skills, go ahead automatically.

But heroes’ energy, attack, the defense is in your hand. You use these items efficiently to defeat the evil gangs, defend yourself, and in increasing of power.

You should know about the basic of the Fire Frontier Heroes Of Valor game;

In Fire Frontier Heroes Of Valor game, all resources are valuable. If you spend these resources blindly then it would be difficult to progress. But if you spend these resources by analyzing the current situation, then it will benefit you in next levels. Resources such as coins, gems, emeralds. You can earn coins anytime by playing battles again and again, but other items such as potions, shield, warrior drink, holy strike etc. are limited.

Reward/Chests – You get these items as a reward when you win a battle. You can open one chest for free, and rest chest can be collected by watching videos. Watch videos and open all the chests. This will increase your reward and you will be able to progress fast in the Rise Of Heroes game.

Remember that you will not get chest again by playing the same level. So don’t lose these rewards. 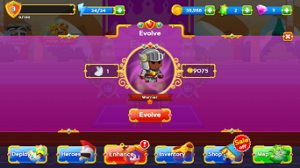 Training/Evolving; Training and evolving are two different aspects. Training a hero means level-up, level-up means more power & defense. Evolving a hero means upgrading all the qualities of a hero; skills, defense, attack to a next level.

You should evolve your heroes to upgrade their skills because skills help a lot in battles. To evolve a hero, train them & level-up.

Items; As mentioned above, Rise Of Heroes game features auto-battle mode. The job of the player in battle is to use items at right time. For example; use potions when you see your attacking heroes have low health. Use warrior drink & shield when you are fighting against the boss.

How To Equip A Weapon?

Head to heroes section, tap on a hero, then tap on the + button, choose an equipment. You can also remove existing weapon.

How to win the boss fight?

In Fire Frontier Heroes Of Valor game, the boss fight is the toughest fight. But if you use items then it would be easy to defeat the boss. First, restore your heroes’ energy. Use shield item to defend your all heroes from attacks. Then use warrior drink or strike item to finish off the fight.