Do you love endless games, platform games or challenging games? If yes, then you should play Royal Cats, a brand new game for Android in which you control three cats, avoid all kinds of obstacles and steal the King’s dinner.

In Royal Cats game, you have to complete six stages first to unlock endless mode. The goal is simple, you need to avoid all kinds of obstacles, manage three cats, and steal the King’s dinner. Can you collect all coins at every stage? It’s too difficult to control three cats together, avoid obstacles, and collect coins. That’s the challenge. But if you know about the controls, obstacles, high jump control, then it would be easy to clear the stages. 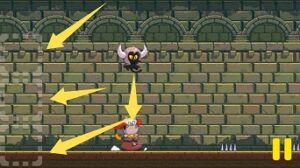 It is a multitasking platform game, and you have to control three cats at the same time.  But it would not be easy because of obstacles like arrows, knife, ghosts, and more.

How to jump high?

In last three stages, to avoid obstacles, your cat should jump high. There are three cats: –