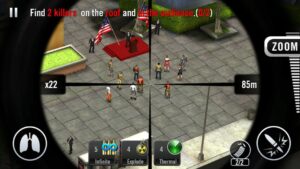 Description – One of the best light size Sniper Shooting has just published in Google Play Store by Mouse Games. Seems to be a great sniper shooting game with many challenging levels. Here’s what you need to know about the game – overview

Mouse Games is very popular Android developers’ team for great mini/lightweight games such as Basketball Mania, Mini Football, SpeedCar, SpeedMoto, and many more. Recently they published a sniper shooting game for Android “Sniper Shot 3D: Call Of Snipers”. And, it is very challenging with lots of levels. 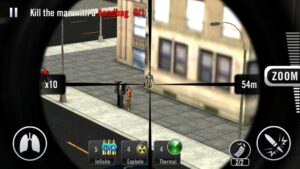 Sniper Shot 3D is an offline game but you need an active internet connection for downloading of new weapons. There are two regions in this game. Region 1 has Black Ops, Sniper, Assault, Pistol – Game Modes.

When you complete all the missions of Black Ops, Region 2 will be unlocked. Missions –

You will be rewarded with 700 Bucks which can be used to upgrade your weapons. Upgrading of weapons is necessary in order to play more missions.

Power-Ups – Thermal, Infinite, and Explode. You can buy these Power-Ups with gold. You can get gold or money by completing missions.

The player can change or upgrade weapon from weapons section of the game.

By default, you have full energy(10), it will be reduced when you play a mission. So, try to complete a mission in one turn. Your energy will be restored after a specific time. The player has the option to instantly restore the energy with gold.

It is a light size game with many challenging and addictive levels. Graphics are also superb as well as gameplay. If you are looking for a light size sniper shooting game, then you should play the game. Download – here[Google Play Store].