Genshin Impact Xinyan Build Guide: find out Xinyan build, best weapons & artifacts for her, and more info on her skills and strengths. 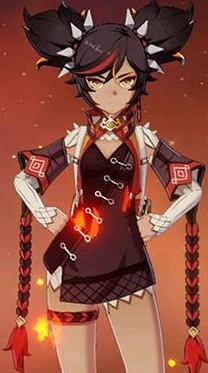 Xinyan is the new 4-star grade Pyro element character in Genshin Impact that will be available in the game’s version 1.1. She will become part of the rest of the rosters’ club when this version goes live. Let’s talk about her strengths & skills: Xinyan’s skills are pretty much similar to Noelle. Xinyan, just like Noelle, uses the Claymore in the combat. With elemental skill, Xinyan not only causes Pyro damage on the enemies but also builds up a shield that scales her DEF/durability – just like Noelle does. With elemental burst ability, Xinyan builds up a force of explosion around – causing continuous damage to the enemies in that area. (Also, see – Genshin Impact Codes)

No information yet. We’ll update it as soon as possible.

A few things to check out before you proceed further: –

The best weapon for Xinyan in the Genshin Impact would be “Skyward Pride”. Skyward Pride details: –

The best artifact set for Xinyan in the Genshin Impact would be X2 Pale Flame, X2 Bloodstained Chivalry.

So that’s all we got in this post on the Genshin Impact Xinyan Build guide: skills, artifact, weapon overview! NOTE: This article is in development.