Help Bendy in the nightmare by defeating the boss! Check out our Bendy In Nightmare Run cheats, tips & strategy guide to complete acts fast

Bendy In Nightmare Run is a brand new boss runner game for Android iOS by Joey Drew Studios in which you play as Bendy and embark on the nightmare journey that takes you deep into the four cartoon words. Blendy In Nightmare Run game features three cartoon characters, four bosses, and very challenging acts in which you face elite bosses trying to eat you. And today, in this post, we have covered everything about the game you need to know: Bendy In Nightmare Run cheats, tips & strategy guide to killing those hungry bosses! Let’s dive in!

Bendy In Nightmare Tips and Cheats: –

#1.) Take The Energy Drink Before You Start Running

The Bendy In Nightmare Run game features three characters or cartoons; Bendy, Boris The Wolf, and Alice Angel. Bendy and Boris The Wolf’s base HP is 12, means after getting 12 hits(3) from the boss, your game will be over. The third character, Alice Angel, has the lowest base’s HP stats; 8. But in all the acts, the boss has an advantage as its HP stats are far better than yours. So we would recommend you to take the energy drink before you start running. All you need to do is watch the video ad; tap the round shaped button, close to the play button. Once done, Bendy In Nightmare Run game will increase the base’s HP of your character.

Since our HP is lower than the bosses, featured in Bendy In Nightmare Run game, we have to deal more damage to it. In a similar way, another advantage the boss has is its damage power; it’s better than the character; large weapons deal massive damage though. Since its damage power is high, character’s HP is low, leveling up is the only way to get some power. We would recommend you to level up the character as soon as possible in order to progress fast. How to level up in Bendy In Nightmare Run game? Basically, you earn XP by playing the game or even more XP by defeating the boss’s pets/minions. After gaining enough, your character’s level will go up. Once you reach the level 5, HP upgrade gets unlocked. It means a further increment in level increases the Bendy’s HP stats. To level up fast, you can spend Bacon Soup Cups. Go to the character’s profile screen and hit the level up button. Reach the maximum level(it’s 20, as per our details) to get the most out of the character.

In Bendy In Nightmare Run game, abilities such as a magnet, shield, bomb, daze, fortune, and heal help a lot. By default, the game offers only one slot for free, means you can choose only one ability at the beginning of the game. You can unlock new ability slots by spending Bacon Soup Cans. These abilities can be used in the run/nightmare-journey to get an advantage; for example; magnet ability helps you in collecting Bacon Soup Cans. But these abilities have a limit; time duration. After a one time usage, the player has to wait a certain amount of time; cooldown period. By leveling up the abilities, you can increase the duration and decrease the cooldown duration.

You can attack the boss from any lane(total – 3). But they can attack only in one lane at a time. In the first event of the run, they attack slowly. And as you run or deal damage or survive for a long time, their attack speed gets increased. In this fury zone, ignore all the loot; Bacon Soup Cans and focus on their movements; dodge their attacks by swiping left/right or double jump. You don’t even need to look at the weapons; you will get gradually as you keep running. Don’t be greedy when the boss is on fire.

In Bendy In Nightmare Run game, we can use this item in leveling up the characters, enhancing the abilities, to unlock weapons/costumes/characters. We would recommend you to save and spend wisely; first priority; level up the default character(Bendy), then ability, and ability’s second slot.

You will often interact with the boss’s pets/minions after dealing damage to the boss. The boss leaves the match and sends pets to attack you. In order to call back, you need to defeat the boss’s pets/minions. In Bendy In Nightmare Run game, you can strike down the small enemies by jumping over them or use weapons. If you want to slay down them by jumping, then you need to time the jump. These small enemies get a push after every certain amount of time(watch or pay attention to their jump area). You have to make the jump right after you see their jump area/point.

Bendy In Nightmare Run game features three types of weapons; small, medium and large. Large weapons deal more damage to the boss in comparison to medium or small ones. You can check the list of weapons below or in the game’s weapon menu. But the drop rate of the large weapons is low as compared to medium or small weapons. So don’t miss the opportunity and grab the large weapons when dealing with the boss. Additionally, you rarely get a healing power-up kit which can restore the health of the character. Try to collect it too.

As mentioned above, the Bendy In Nightmare Run game features three types of weapons; large, small, and medium. And there is a wide variety available in all kinds. Try to unlock large weapons as soon as possible to complete the hard levels(however, all the levels are hard). How to unlock? Complete the acts and go to character’s info menu -> customize -> head to the weapons tab -> and there you can check all the weapons.

Unlike other endless runner games such as Subway Surfer, Temple Run, Bendy In Nightmare Run game is very hard. And to master the game, you need to master the controls first;

Bendy In Nightmare Run Guide: – How To Play

It’s not an endless runner game like Temple Run or Subway Surfer. In Bendy In Nightmare Run game, the player’s objective is to defeat the boss as soon as possible. In the nightmare, Bendy runs automatically; you can move him by swiping on the screen. The boss’s objective is to eat you and your objective is to survive and beat the boss. At the top-left corner of the screen, you can check the boss’s HP and at the top-right corner, you can check the character’s HP. You can attack the boss by throwing weapons.

Additionally, you can level up, unlock abilities that give the character an advantage in the play. Here’s the main screen guide: – 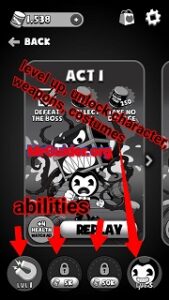 You can unlock costumes in the customization menu; complete the acts to unlock. Some costumes such as Golden Bendy, Explorer are unlocked by default. Complete the missions or spend bacon soup cans to get.

So this is Bendy In Nightmare Run game guide and tips, cheats & strategy for the beginners. Also, see – Best Horror games for Android 2018