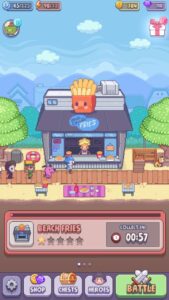 Cartoon Network Match land is a new puzzle RPG by Cartoon Network games in which you choose your best heroes for the battle and defeat enemies to run your business. The game features a match 3 gameplay with RPG elements, lots of challenging levels, shops, heroes, and much more. In this post, we have covered everything about the Cartoon Network Match Land game; tips, guide, and cheats.

First of all, let’s learn the basic of the game. In this game, you have to choose your best heroes for the battle. Each hero’s attributes are different; attack, recovery, skill, damage. You just have to match the same color tiles; just swipe; left, right, up, down, and diagonal. It is different from another match 3 games. There is a timer, it will start when you play your turn, you should be quick because the timer is very fast. However, you can increase the time by matching same tiles back-to-back. After the turn, your hero will earn AP and attack the enemies. Your enemies can also attack you. You have limited health points and if you lose all, then you need to restart the level in Cartoon Network Match Land game. It is a fun game and better than others. Let’s start the CN match land game guide.

In this part, we will learn everything about the game; heroes, shops, upgrades, tokens, stamina, chests, evolve, and much more.

The cartoon network match land game features dozens of heroes. Each hero has own unique skills, can be unleashed when your power bar is full. Stats of heroes are divided into three attributes; attack, recovery, and health. The player can upgrade these stats by upgrading and evolving their heroes.

As you can see, each hero’s skill is different.

How to unlock heroes in Cartoon Network Match Land game?

There are lots of heroes featured in the game. Most of them are locked and to unlock them, you need Figurines. For instance, to unlock pearl, you need 25 pearl Figurines. Figurines can be obtained by opening chests or as a reward. Figurines are divided into three categories; common, rare and epic. The treasure chest is one of the best ways to get these figurines for free.

Eatmos are used to evolve heroes and increase their power. Eatmos can be obtained from your shop. Each hero requires a unique eatmos; here’s the list[name – eatmo – shop]

Go to the main screen of the game, tap on the shop icon(at the bottom), there you can see Eatmo bar. Once you have enough Eatmo points, you can collect it. Swipe right side on the main screen to check your next stores.

⇒Coins can be obtained by getting victories through battles, in exchange for diamonds, from shops, and as a reward.

⇒Diamond is one of the rare In-game currencies in the Cartoon Network Match Land game. Obtain it by getting victories in the boss battles, chests, or as a reward.

⇒ The game uses energy feature, you can not play it endlessly as you have limited stamina. You can get stamina by watching the video ads or wait for few minutes.

You get Eatmos or coins from your shops, you can unlock more shops by clearing the stages and leveling-up your profile. Upgrade the shop to increase Eatmo reward and earnings. Upgrading a shop requires material; basil, chili, and more. Get this material from the battles.

⇒ Tap an enemy to focus attacks and skills

Try to get three stars at every stage and you can claim the quick loot. To claim, tap on the 3-starred level and confirm. The refresh process takes hours, so check it regularly.

Use your coins to upgrade your shops so that you can earn more coins and eatmos. To upgrade a shop, tap on its icon and confirm. It will boost your earnings and other rewards.

Under the shop section of Cartoon Network Match land game, there is a daily market section. You can buy useful items there in exchange for coins. It is one of the best ways to acquire keys, figurines, and tokens in the CN match land game. So grab them if you have enough coins.

At the top right of the screen, tap on the gift icon and claim your free gift. You might get free tokens, figurines, and much more useful items from this gift pack.