Castle Burn – RTS Revolution is now officially out for Android on Google Play Store. The game has plenty of game modes to keep the player busy all the time and the reward system is also decent. And you need to use the best strategy in order to beat the opponent. In this post, we have covered everything about the game you need to know: – Castle Burn guide and Castle Burn cheats, tips & tricks to master the game.

In Castle Burn game, your main objective is to burn or destroy the opponent’s castle as fast as you can. It would be the 1v1 battle; you fight against one random player. All you need to do is deploy the units on the battlefield in a strategic way and destroy the enemy’s castle. You start the game from training league in which the game guides you the basics; how to add cards to the deck, how to deploy mana sanctum, camp, and how to upgrade the castle tier. Here’s how to play Castle Run game: – 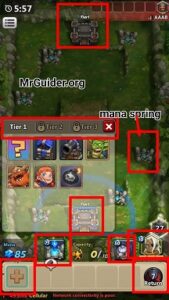 The very first step you have to do in Castle Run game is; build the mana sanctum on top of a mana spring to collect mana. Mana is used to deploy units or build towers or camp. And the camp is used to expand the territory; you can deploy units within the territory only.

To add the units, tap the + icon(deck slot) and choose the card; unit or spell. It costs you mana. Read the guide part below to learn about the cards and tiers. Along with these units, you can also deploy a hero; the player can change the hero before the battle.

There is one objective; destroy the enemy’s castle and protect your own. After the victory, the game will reward you trophies, chests. After gaining a certain number of trophies, you will get promotion and reach the new league. So this is the basic Castle Burn guide for the beginners. Now, let’s head over to the Castle Burn ultimate guide and then tips, cheats & tricks.

Heroes are the main characters in Castle Burn game. You can choose up to 1 hero at a time. And in the battle, you can deploy it at any time. If the hero gets died, then you will have to wait a certain amount of time in order to deploy it again on the battlefield. How to obtain more heroes? Open the chests and uncover the castle cards; you get the heroes from these chests. You may get the duplicate hero card from the chest; use it to upgrade the hero.

In Castle Burn game, units are classified into three tiers-

You can start the upgrade of the castle by adding cards to the deck. Here’s the process: –

Keep in mind that it would not upgrade instantly; once you add the cards, the upgrade process will start.

The spell is used to destroy the group of enemies instantly or to deal massive damage to a group of enemies. And units are movable characters, attack the enemies automatically. And each unit has a different target. For example; Ogre is a ground unit and targets buildings & towers only(this unit does not attack the enemy’s units). A berserker targets ground units only. So make sure to know about the units you have.

As mentioned above, In Castle Burn game, two players fight against each other and the player who destroys the opponent’s castle first wins the battle. There is a fixed time duration for the battle. If both the player fails to destroy the enemy’s castle, then the negative period will start. And in this period, both the castles will take the damage. Read the basic part above to know the basic of battle. Also, see – Top new best time-management games for android

In the battle, we can add up to 6 cards to the deck. And as you know, tier 2 units and tier 3 units are more powerful than tier 1 units. So we would recommend you not to add more than two cards of tier 1. It would be better to choose one tower and one unit from tier 1. After adding two cards to the deck, the castle will be upgraded to tier 2 and you will be able to add tier 2 cards to the deck.

The cost of mana also varies on the basis of tiers: –

So make sure to choose two good attacking units from tier 1(because their mana cost is low).

#2.) Boost The Mana Production, Here’s How

Mana is used to deploy units, tower, spells, camp, and mana sanctum. If the mana production is so slow, then it will be hard for you to deploy high-tier units as they have a high mana cost. Here’s how you can increase the mana production: – Deploy the camp on the battlefield to expand the territory and capture as many mana springs as you can. Move the mana sanctum on the top of mana spring to produce mana. Upgrade the castle’s tier.

First of all, you should know about the units have: without having proper info of all the units, you will not be able to deploy them on the battlefield wisely. Here’s the quick walkthrough to select or deploy units wisely: –

Go to the main screen -> castle tab(first one) -> at the top-left corner, tap the cards; there you can see the list of heroes and units. Tap on a unit to check its attributes; health, damage, speed, target type, and more. Also, see – Best strategy games for Android

#4.) Practice In Casual Match To Know About The Units

Castle Burn game also features the practice mode in which you can train yourself for the ranked match battle. And it is one of the best ways to know about the units, spells, and heroes’ skills. You will not lose trophies in this mode. Go to the adventure mode screen -> practice battle -> select difficulty; normal, easy, beginner -> start.

Or go to the battle screen -> choose casual mode -> hit the battle button and play against one random player. Also, see – Best simulation games for mobile

#5.) Pay Attention To Other Game Modes For Special Rewards

Path of the adventure -> Play this mode to earn gold. Mist Rock Campaign -> In this mode, you battle against other players to top the leaderboard. Here’s how it works; create a deck by choosing desired cards, defend the castle, defeat the waves of enemies, and increase the rank. At the end of the season, you will get rewards.

You can obtain gold, a card pack in exchange for the golden Viking trophy. You get this trophy as a reward. If you have, then go to the shop -> event shop -> there you can exchange it. We would recommend you to grab sage’s card. Also, see – Best adventure games for Android

#7.) Convert The Cards To Get Better Ones

You can convert cards in Castle Burn game and get the desired card, here’s how: –  Go to the shop -> scroll down and choose convert option -> select cards ->

First, select the card you want to convert(keep in mind that you can convert only extra cards); tap the card -> choose; convert from. After it, tap the card you want to get -> choose; convert to. Once done, hit the confirm button. After a certain amount of time, you will get the cards. It is one of the best ways to get the desired cards in Castle Burn game. Make sure to use useless cards for the conversion.

Unlike other games, In Castle Burn game, it’s very easy to obtain premium currency; rubies. We would recommend you to use rubies to buy the premium card pack from the shop; alchemist’s card pack. This pack contains rare cards and it costs you 120 gems. Rest packs are too expensive.

#9.) Spin The Wheel For Rewards

Go to the shop -> goblin shop section -> lucky roulette -> spin wheel -> get the reward. You can spin it for free by watching a video ad. Spin it 10 times to get free rubies.

Some units are weak and strong against specific units. If you deploy the strong units against the enemy’s units, then you will get the advantage. How to know unit’s affinity? Go to the castle tab -> at the top, tap the cards option -> go to units tab -> tap the unit -> tap the affinity button to check. For example; Archer is weak against Viking, Griffin rider, shield mouse, but strong against the goblin, bomber mouse, airship, and more.

So these are top Castle Burn tips, cheats & tricks for the beginners. Also, see – Top new Android games of this month