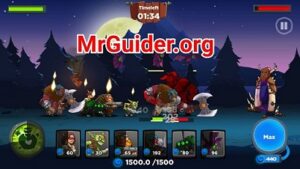 OneSoft Studio, the creators of metal soldier game series has just released a brand new strategy game for mobile devices “Castle Kingdom: Crush In Free”. And it is one of the best strategy games for Android in which you build the team of heroes or characters and battle against enemies in an epic action-packed strategic battle. The game features campaign mode and arena mode. You can even play it offline. In this post, we have covered everything about the game you need to know: Castle Kingdom guide and Castle Kingdom cheats, tips & strategy guide to get 3-stars at every stage!

Get Started – The Basic – Castle Kingdom

Before we dive into the guide, tips, cheats & strategy part, let’s learn the basic of the game. In Castle Kingdom game, your objective is to build a strong team to strike down the opponent team. You can power-up characters/heroes, summon powerful heroes, equip them with weapons or skills, and manage your own base; main skill, base, mana pool, and much more. Initial levels in this game are quite easy, but later as you progress, it becomes more difficult and it would be hard to get 3-stars at every stage. Let’s start the Castle Kingdom guide and after it, check out the Castle Kingdom cheats, tips & strategy to obtain 3-stars at every stage.

In this part, we will learn about heroes/characters, summoning, base, team, battle, skills, upgrading, and much more.

It’s quite simple. All you need to do is deploy your characters on the battlefield. Deploying a character costs you mana and you can check the cost of mana at their icons. Mana re-generates automatically and you can increase the speed of mana(reg.) by leveling up mana pool. At the bottom-right side of the screen, you can see the mana pool. Leveling up mana pool costs you mana. As you level up, the production speed of mana will increase and there will not be the shortage of mana and you will be able to deploy characters easily. Check out the Castle Kingdom tips, cheats & strategy guide below to know how to win the battles.

At the beginning of the game, you have 5 characters. You can choose up to 6 characters for the battle. To unlock new characters in Castle Kingdom game, you can use summoning feature. Types of summoning: –

It is not necessary that you will get a full character by using summon feature. You may get shards of a particular character. Once you have enough, go to the barracks -> heroes -> here you can check all the characters. Tap on the get unit option to unlock the character(it appears if you have enough shards). 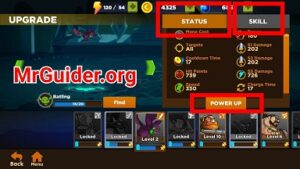 Castle Kingdom game features amazing heroes. The stats of each hero is different; HP, damage, cooldown time, and more. Go to the barracks -> heroes -> select a hero and you can check all the information about it under the status tab.

To increase the stats of heroes, power-up it. It costs you coins.

Another way to increase the power of heroes in Castle Kingdom game is to equip them with weapons/skills. You can obtain these weapons or skills from the campaign mode levels.

Just go to the skill tab under heroes section -> if you see + icon there, then tap on it and equip the weapon. Find and equip all the weapons to activate a special skill/passive bonus.

Go to the barracks -> my team -> and there you can edit your team; you can select up to 6 characters. Select the best characters; read the cheats, tips, strategy guide below to know how to balance the team.

At the beginning of the game, you have thousands of diamonds. Spend them and go for gold summon. Get your characters and focus on the best characters. Since the gold is limited, you should not spend on useless characters. That’s why it would be better to summon early and build the perfect team of 6 characters. On the other hand, if you wait for the gold key, then it will take a long time in building the best team. And keep in mind that you don’t have to upgrade each character. Spend only on best characters.

After you use the diamonds, it’s time to select the best 6 characters. Go to the barracks -> heroes -> check the stats of characters you have unlocked.

Compare/choose and then go to my team section to edit the team for the battle. Make sure to include: –

Make sure to power-up the characters. Leveling up or powering up a character increases its stats.

Equip skills or weapons -> You get these weapons by playing the game; campaign mode.

To equip, go to the barracks -> heroes -> head to the “skill” tab(near status), then tap on the + icon and equip. If + icon is not there, then it means you have no weapon or skill for that particular character.

It is one of the main tasks in Castle Kingdom game. To defeat the enemies, upgrade the base. 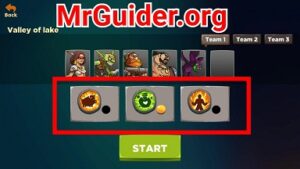 As stated above, it becomes more difficult after a certain level. But these tips will help you to clear the stage without any casualty.

So, these are some Castle Kingdom tips, cheats & a strategy guide for the beginners. Also, see – Best simulation games for Android