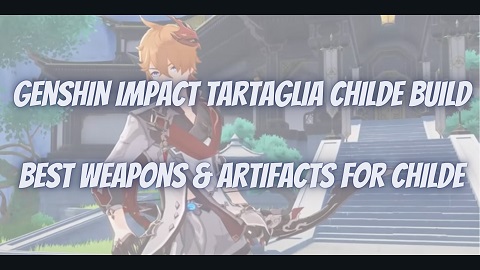 Tartaglia Childe is among the 5-star grade characters in the Genshin Impact game. He will join the rest of the party of characters in the November 1.1 update. Childe uses the bow type weapon to strike enemies.

Let’s talk about his strengths and skills: with the elemental skill(Foul Legacy: Raging Tide), you can unleash close-ranged attacks(Switching from the bow attack to melee) + when attacking a non-friendly unit with a certain type of status(Riptide), inflicts additional Hydro DMG.

With elemental burst ability(Havor: Obliteration), Tartaglia Childe, based on the current stance(ranged or melee), perform unqiue attacks. When using the bow, the burst skill hurls a water shot that inflicts debuff(Riptide Status) on the enemies and gives you back a portion of elemental energy. When in close-combat/melee form, Childe performs a large area slash damage.

No info yet. We’ll update it as soon as possible.

A few things to check out before you proceed further: –

Amos’ Bow: – a 5-star bow weapon that you can equip to Tartaglia Childe to empower ATK DMG caused by normal and aimed shots.

The Viridescent Hunt: a 4-star bow weapon that empowers ATK and CRIT Rate. Bonus Effect: upon hit, the normal and aimed shots have a chance to make a cyclone that continuously attracts nearby enemies – causing DMG.

Skyward Harp: This is the most preferred weapon for Childe along with the Rust weapon, which we have mentioned below. it’s a 5-star bow weapon that empowers ATK and CRIT rate/damage of the character. You can equip this weapon to Childe and boost ATK/CRIT.

So that’s all we got in this post on the Genshin Impact Tartaglia Childe Build guide: skills, artifact, weapon overview! NOTE: This article is in development.