Clash & Go is a brand new strategy game for Android and iOS by Elyland. Check out our Clash & Go guide, tips, cheats & strategy

Elyland, the creators of Wormax.io game, has just released a brand new AR strategy game for Android that features city building mechanics and RTS mode in which you raid on other players’ base for resources. If you have ever played Clash Of Clan like games, then you can easily understand its mechanics. If not, then we are here to guide you. Today, In this post, we have covered every basic aspect of the game you need to know as a rookie; Clash & Go guide and Clash & Go tips, cheats & tricks to conquer the galaxy. 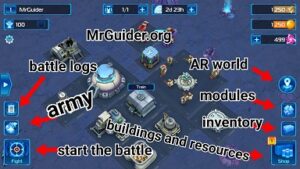 Before we head to the ultimate guide, tips, cheats & tricks part, let’s learn the basics first. In Clash & Go(Clash Go) game, all the players fight for the resources. These resources are used in building and upgrading the resources/defense/military facilities. Since there is no tutorial for the players, one has to figure out all the game’s mechanics manually. But for the starters, it could be difficult to understand how things work in Clash & Go(Clash Go) game. Let’s get started: –

In the Clash & Go game, you have to manage three things: –

Base – At the start of the game, you will find these buildings on your base; Command Center, Military Plant, Training Camp, Clan Castle/Citadel, Construction Shop, and more. Tap on any building -> hit the info button to get more details. You have to grow your base by planting more facilities; resources, defense, army, and more. Tap the shop button and from there you can see all the buildings featured in Clash & Go(Clash Go) Game. Upgrading is also an important part of the game.

Base’s Defense – Clash & Go is an online real-time strategy game. Other players can raid your base and steal the resources. If they get successful, you will lose trophies. So, as a leader, it’s your responsibility to protect the resources from other players by managing the defense activities. You can plant traps, add the wall, build cannons/guns/launcher/turret/tower to strike down the intruders.

Troops – You can also attack the enemy’s base to loot the resources and win the trophies. Clash & Go game features lots of units/troops/characters; train them and go for the fight. There is also a hero who protects the base from intruders and you can deploy him in the battle.

In short, build, upgrade, attack, and defend! That’s it! Let’s head to the ultimate Clash & Go guide and then check out our Clash & Go tips, cheats & tricks!

In this part, we will learn about the resources, troops, buildings, and much more. Make sure to check out everything to master the game!

Command Center is the main building on your base. If you want to build more resources production buildings, defensive devices, and more, you need to upgrade it. It also impacts the storage capacity; upgrade it to store more resources; Helium and Titanium.

In the battle, one can easily get the victory by destroying the command center. So you should protect it with walls, traps, and defensive devices.

There are two main resources in Clash & Go game: –

Helium and Titanium. At the beginning of the game, Helium is used to train the troops. And titanium is used to upgrade the buildings.

You can produce Helium in Helium-3-Separator. To store more Helium, build or upgrade the Helium-3 Storage device.

Titanium – Produced in the titanium mine. Store more by upgrading or building titanium storage device.

You can also loot these resources by attacking other players’ base.

Before you start the battle, you have to train the troops. You can train troops in training camp or military plant. Training Cost; Helium.

Upgrade the training camp to battle with more troops.

Hero helps you in defending as well as in raiding. Head to the hero’s outpost facility on the base to get more details. Deploy the hero in the battle, earn XP, and increase its level. As you increase the hero’s level, new skills will get unlocked. You can use these skills in the battle; for instance; use healing skill to restore the health of hero.

Nanorobots are another main units in Clash & Go game. You can train these units in the military camp. Build the nanorobots factory first to create or train these units. There are two units as of now; AoE damage(to deal damage) and AoE healing(to heal other units).

You can boost the productivity of units, buildings, heroes, and nanorobots by installing modules. Tap on any building or facility; info -> tap the + icon to select the modules. Go to the modules menu(see the first picture of this post) -> there you can see the list of designs you have. Tap on anyone and assemble. Depending on the type; these modules will boost the performance. For example; life modules(heart) can increase the HP/Life of facilities, damage modules(fire icon) -> increases damage, production booster modules -> production speed, capacity modules -> increases storage capacity(helium, titanium). 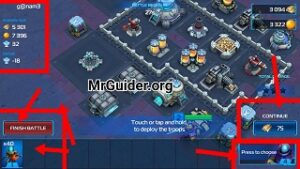 Tap the fight button to select the game mode. There are two game modes; rating battle mode, in this mode you raid other players’ base. Campaign Mode; It’s PvE(Player Vs Enemy/Environment]. If you want more loot, trophies, play the rating battle. Hit the search button to search for an opponent; you need titanium to play this mode. Once found, check the loot and the base’s layout; units, heroes, defense. If you think, you can destroy its base, then deploy the unit to start the battle. If you think the loot is not enough and the enemy’s base is good, then tap the continue button to search another opponent. Or tap the finish button to go back to the base. To start the battle; select a unit or hero and deploy on a valid area.

Remove the crater or volcano from your base.

On the base, search citadel building; restore it and then you will be able to create the clan.

Tap the location icon to dive into the AR world. Explore the open world; gather resources, container chests, find towers, mines, and enjoy. Interact with these objects to get rewards. Pick the chests and get free rewards! Also, see – Best Open World Games for Android

#1.) Explore The AR World To Get Free Rewards

The highlighted feature of this game is AR world. Switch to the AR mode by tapping the location icon on the main screen of the game. After it, explore the open world, collect or interact with objects like container chests, mines, the pile of resources to fill your pocket.

#2.) Join A Clan And Ask For Reinforcement

When you join a clan, you can ask for reinforcement and clanmates will be able to donate the units. And you can also participate in the clan war and enroll yourself in the event to get the massive amount of resources. That’s why you should join an active clan in Clash & Go game.

#4.) Protect The Resources From Intruders

The main aim of the players is to steal the resource; not to earn trophies. So their target will be resources facilities; titanium and helium storage. You have to protect these resources because it would be a huge loss if you lose these resources. To protect, cover these facilities with the wall, defensive unit(cannon, turret, emitter, and traps; landmine, force field, Annihilator, and more).

Antimatter is one of the rare resources in Clash & Go game. Don’t spend on useless tasks such as instant training of troops, instant construction, and upgrade. Use it to buy the construction shop; to add more builder to the base(to build and upgrade multiple building at a time).

Go to the shop menu of the game -> items-> from there you can claim one chest for free every day.

So this is our top Clash & Go tips, tricks & a strategy guide for the rookies. Also, see – Best strategy games for Android