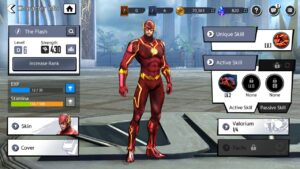 Cover art is one of the main items in the DC Unchained game. You use these cover arts to increase the several attributes of an individual hero; HP, agility, strength, and more. You will get your first cover art as a reward.

⇒ How to get new cover arts?

There are three ways to get cover art pieces in DC Unchained game. After collecting all the pieces of a particular cover art, you can unlock it using gold. Three ways;

After collecting all the pieces, go to the menu -> cover art -> select the cover art -> combine -> spend gold. That’s it.

You can acquire tactic through events, from the shop, as a reward. These tactics allow the character to execute certain actions during the battle. For instance, When HP is low, use HP Potion.

You can unlock gear feature after clearing the Nanda Parbat 10 stage. Using these gears, you can enhance the active skills of a particular character. Total number of active skills – 5, number of gears available per skill – 3, total gears = 15. The player can equip one gear per skill.

⇒ Go to the character’s info section -> gears -> tap on the + button and select a gear. Just tap on the equip button. That’s it.

In DC Unchained game, team level can be leveled up through Team Training. It gets unlocked after you level-up your profile. Go to team training -> select a team of hero or villain or alliance – > start training.

What is team effect?

The team effect increases the attributes of all heroes or the whole team; for instance, Legion of Doom -> Increases the physical defense of team/all members.

So don’t forget to use this feature if you really want to defeat the powerful boss in the fights.

Team effect and family effect are two different things. You can choose any hero or villain in your team, but, you can not replace a family member with another family member. For instance, in the team, you can choose Flash, Batman, and Wonderwoman. But you can not move Flash to Batman family or Wonderwoman to Batman Family. So in the DC Unchained game, you have to maintain or manage both type of effects; team effect and family effect.

What is the family effect?

This feature gets unlocked after you unlock or collect all characters of a specific family and satisfy the minimum required strength.

Tap on the upgrade option next to strength status and confirm the upgrade. Go to the family section -> effect -> select the family effect to activate.

So there are so many upgrades; character, team, effect, training, and much more. Isn’t it too annoying? Also, see –