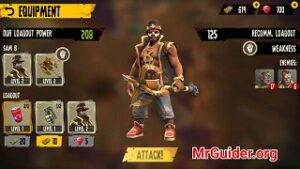 Dead Island Survivors game was in beta for a long time. Now, it’s officially available on mobile app stores worldwide and challenges you to rescue the survivors and defeat the hordes of zombies. Unlike other TD(Tower-Defense) games, in this game, you can control the survivor and defeat the zombies manually. In the game, you visit the Islands and defeat the zombies and rescue the survivors. As you progress to new Islands, you will discover more powerful zombies and it will be hard to stop the zombies(they will break the fence). After clearing the stage, you will get a suitcase, in-game items such as metal, cash, cards(to unlock traps or gears), survivors/companions, buffs(healing item, grenade), and much more. Let’s check out some Dead Island Survivors cheats, tips & a strategy guide for the beginners.

#1.) Pre-Plan The Strategy By Checking The Entrance

In Dead Island Survivors game, before you tap the ready button to start the battle, check the zombies’ entrance. And through which route they will walk to the fence/boundary. Check the red footprints on the battlefield to know. Sometimes, zombies come from multiple directions and there would be two routes. In short, analyze the route and place the traps in the right place. To move a trap, tap it and then long press the trap, and drag & drop where you want to place it. After tapping the trap, tap the reload icon to rotate or change the attacking direction(trap’s).

#2.) Place The Barricade To Block Zombies From Passing Through A Tile

Barricade is one of best traps featured in Dead Island Survivors game. Placing it in the right place will block the zombies from passing through a tile.

For instance; enemies are coming from two routes. Place the Barricade on the right tile to block their route and force them to change their direction. Quick Tip: –

If you have not enough metal material to buy barricade, then you can also use deployed traps as a barrier. Simply move them to a right tile. To deploy the barricade, tap the place traps icon(bottom-left corner[before starting the battle]) and drag & drop to a tile. It costs you metal.

#3.) Activate The Special Ability Of Hero

All the heroes featured in Dead Island Survivors game have special abilities. For instance; Sam B is the first hero you get in the game. Double tap a zombie in the battle to activate Sam’s special ability(creates a shield).

#4.) Call The Companion For Help

Calling a companion when you are going to face the last wave of zombies helps a lot. But the companion would not stay for a long time, after a certain amount of time, it will disappear and to call it again, you will have to spend diamonds(not recommended). That’s why you should call the ally at the right time.

You can change the companion prior to the battle. After tapping the ready button, the game will give you an overview of the fight; the number of enemies, recommended loadout power, camp’s power, selected hero, loadout and much more. Under the loadout section, tap the character’s icon(the third one) and change the companion. Once done, tap the attack button to start the battle. Also, see – Best adventure games for Android

#5.) Tap The Gear Icon To Activate The Traps

Some traps featured in the Dead Island Survivors game will not start automatically. You will see a gear icon on these traps, tap it when zombies are near. For instance, Slicer is the trap that needs to be activated. Go close to it and tap the gear icon.

Similarly, there would be explosion tanks too. Go close to them and hit the gear icon to deal massive damage.

#6.) Avoid Getting Killed By The Zombies

The game will be over if the survivor gets to die. As you know, you can manually move the survivor in the battle and attack zombies by tapping on the screen. While attacking, keep an eye to the Survivor’s HP(at the top-left corner). When you see it is reaching the minimum point, rush away to a safe place. Wait for few moments until it gets restored. And it would be better to choose the best hero for the battle.

To increase the performance of traps in the battle, the player can boost them. It costs you metal. Go to the camp -> select a trap -> tap the upgrade icon -> hit the boost button. After it, wait for a few minutes because it will take some time. You can also speed-up the process by spending diamonds(not recommended).

#8.) Upgrade The Traps Vs Boosting The Traps

You can boost the trap using metal. But upgrading the trap requires duplicate cards & cash. You obtain trap card and bucks from the suitcase. Once you have enough cards, go to the main screen -> tap the collection button(at the bottom-right corner) -> select a trap you want to level up and confirm.

It would better to save bucks in early stages and boost the traps. Save Bucks because, later, in dangerous Islands, you will need a lot.

#10.) Target The Enemies’ Weakness & Point Out The Strength

All the enemies have different stats; pros & cons. After tapping the ready button, tap the enemies to check their pros and cons. For instance; Exploder is a zombie and when low on health, it will explode and deal massive damage in a specific range. So, when you see, it is low on health, keep yourself away and avoid getting killed.

Similarly, Resistor is weak against cannons & crossbows. In short, you should know your enemies’ weakness and strength. Must See – Best zombie games for Android

After the victory, you will receive a suitcase and to open it, you will have to wait for hours. And you can store up to four suitcases only at a time. If all the slots are full, then you will not receive the suitcase. Play when there is a free slot available.