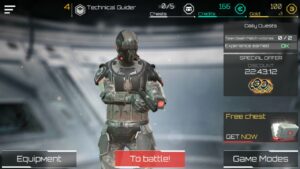 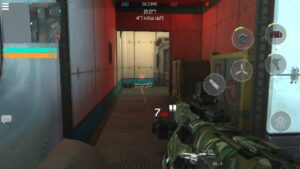 As usual, it starts with a tutorial in which you learn about the basic of the game; how to play Infinity Ops Sci-Fi FPS, about movement, shooting, aiming, how to throw a grenade, and much more. After the tutorial, you can manually handle all the things as you want. Before we move to guide or tips part, let’s learn the basic of the game.

The Basic – Infinity Ops Sci-Fi FPS Guide -> In this game, you play as a shooter and your one & only objective is to shoot down your opponents as fast as you can. As it is an online multiplayer game and you battle against other players from all over the world, it would not be easy for you, the player has to take care of many things; upgrading weapons, characters, gadgets, and much more.

Control Guide -> In Infinity Ops Sci-Fi FPS game, by default, auto-shoot and the aim-assist setting is turned on. So you don’t need to bother about aiming and shooting. However, you can change this configuration under the settings. Go to the main lobby -> tap on the menu at top-left corner and head to the settings -> here you can set controls according to your choice.

Your character shoots automatically, what you have to do in the battle? As aim-assist is turned on, but still, you have full control over the aiming. Another task is navigating the character; silently moving in the facilities or ground+keep an eye on mini-map=survive for a long time.

At the top-left corner, there is a mini-map to track enemies. At the right-side, you have gadgets & jump/jet options. Hold down your thumb on the right-side of the screen and swipe up/left/right/down to change the camera view.

Just below the mini-map, there are two bars which show the health and armor status. You have limited health points and armor points.

Infinity Ops Sci-Fi FPS Guide – The Basic – Completed. Let’s start the next part to learn about everything; weapons, gadgets, characters, modes, and more.

At the beginning of the game, most of the game modes are locked and you can only access team deathmatch mode. To unlock these modes, you have to level-up your profile.

You need XPs to level-up the player profile. How to earn XPs? Earn XPs by playing the unlocked game modes. After the battles, you can claim your XP.

How to level-up Fast?

As you know, you need XPs to level-up your profile. And you get XP after the battle, to increase the amount of XP reward, follow these tips;

In short, to increase the amount of XP reward, improve your performance in the battles. Don’t forget to read our Infinity Ops Sci-Fi FPS tips and cheats, mentioned below.

Each character has its own traits;

Here’s the list of characters[on the basis of elements];

At the beginning of the game, you have recruit shooter. Excluding it, all the characters gain +10% XP and +10% credits. How to unlock characters in Infinity Ops Sci-Fi FPS game?

You need gold to unlock these characters. How to earn gold in Infinity Ops Sci-Fi FPS game?

Destiny Warfare game features lots of weapons and gadgets to slay down the other players in no time. Let’s take a look at the best weapons.

If you equip above-mentioned guns for the battle -> you will get bonus; +10% XP and +10% credit reward

⇒ Use of Drones

If you equip drones, you will get more benefits in the battles; health, armor, weapon damage, accuracy, and more. Best drones;

The gadget is one of the main items in the game;

Headshot is one of the best shots as it deals more damage as compared to other shots. Your character shoots automatically, aiming is in your hand, so, improve your shooting skills by playing the game and always target the head. 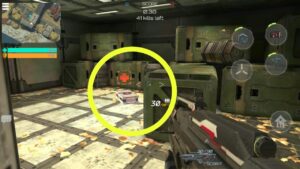 As mentioned above, each character has own special skills. For instance, Killer deals 50% more damage with the sniper rifle, then equip sniper rifle. Recruit’s skill re-generates HP and AP after a certain amount of time, so, if it is injured, go to a safe place and wait until he recovers HP and AP. In short, you should know about your character’s skills, go to the character’s info panel and check the skills.

You can use medi-simulator to restore HP, grenade for more damage. You have a limited amount of these items, you can get more in exchange for credits.

There are a number of strategies you can implement to stay alive;

Upgrade your character and weapons you have equipped to increase your overall power and improve the performance in the battles. You need upgrade points for upgrading the weapons & characters, can be obtained by completing the daily quest, on leveling-up, as a reward.

One of the best ways to get legendary weapons & gadgets in the Infinity Ops Sci-Fi FPS game is by opening the chests; you can open the free chest by watching a video ad, to open battle chests, regular chest, and legendary chest, you have to wait for hours. Go to the chest section -> at the left side of the screen, tap on a chest to open it.

After you kill the player, go close to it and check its weapon; if it’s better than yours, then pick it, if not, then ignore.