Our Fate of the Empress gift code Wiki has the latest list of working redeem codes. Get the new active gift codes and redeem some goodies 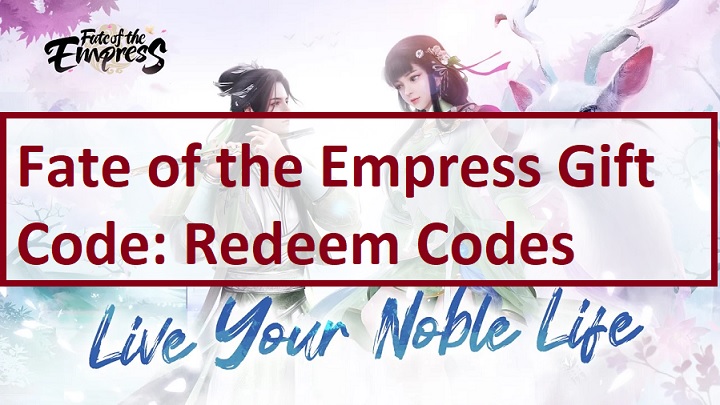 Fate of the Empress Gift Code⇓

Fate of the Empress Codes⇓

Fate of the Empress gift codes are time-limited; these gift codes expire after a few days, so you should redeem them as soon as possible and claim the rewards to progress further the game. We keep an eye on the new valid codes for this game title, so we recommend you to visit this page regularly.

To avoid any gift code error, please make sure that you enter the redemption code in the game as we have displayed in the list we have listed above, including the special characters and letter case (capital & small letters).

As we have mentioned above, the redeem codes will work for only a specific time period. Below, we have shared all the expired codes, you can try redeeming these expired codes and see if they work for you: –

Fate of the Empress Codes FAQ⇓

How To Redeem The Gift Codes?

To redeem the Fate of the Empress gift code, you need to follow these simple steps: –

Step 1.) Open Fate of the Empress game on your mobile device

Step 3.) Tap the bonus option in the top-right corner; if there is not BONUS option, you may need to progress a bit; reach level 16 or higher by doing the main quests that you see on the left side

Step 4.) When you tap the bonus option, a new screen will open. It would have lots of tabs on the left side; tap on the tab that says “redeem code”. Tap on the redeem code tab and then enter the code to receive the reward.

If the code is active, you will get the rewards immediately. Codes do expire after a few days, so make sure to redeem them as soon as possible.

How To Get More Gift Codes?

More new Fate of the Empress gift codes are published on the game’s official social media handles like Facebook, Instagram, Twitter, Reddit, and the game’s official Discord. Usually, the developers of the game publish the gift codes on special events like the game’s milestones, popular occassions, collaborations, and special events. We will update this gift code list with all the new redemption codes once available. You can bookmark this page and keep regularly checking for new codes.

So this would be all in this post on Fate of the Empress gift code: codes to redeem. Got a new working gift code? Comment below.

Fate of the Empress Game Description: –

Set in ancient China, Fate of the Empress is a turn-based RPG that faithfully recreates a majestic imperial city. Get ready for palace intrigue, beautiful 3D graphics, and a tale of love told through stunning animated cutscenes and expansive, complex gameplay.

【Feature】
Grand Banquet
Invite your friends to witness the upgrade of the relationship between you and your lover. Get prepared to receive a massive number of the sweetest wishes.

Intimate Soulmate
Explore the marvelous world with your soulmate. Get your relationship polished with love and experience.

Invincible Squad
Summon and recruit historical heroes to guard what you cherish and who you love. Upgrade your squad to conquer the throne and become a one-of-a-kind empress through missions and stories.

Wonderful Life
Escape from the official circles when you feel tired. Or turn back to fight for your glory at any time. Experience palace life in your way.

Adorable Pets
Interactions with pets are always fun, especially in Fate of the Empress!