Giants War is a brand new RPG for mobile devices by Gamevil. Check out our Giants War guide and Giants War tips, cheats & strategy to defeat the boss enemies and progress fast

Gamevil has recently released a brand new RPG Giants War, featuring amazing heroes, boss fights, PvP arena, building elements, and many more features. And there are lots of things you have to take care of in order to beat the rivals and rank-up. In this post, we have covered everything about the game you need to know: Giants War guide and Giants War tips, cheats & strategy to master the game!

Get Started – The Basic – Giants War

Before we dive into the cheats, tips & strategy world, let’s learn the basics first. In Giants War, the player can choose up to 5 heroes for the battle; in adventure mode as well as in PvP mode. And the same heroes can be deployed in defense. At the beginning of the game, you have two heroes and as you level-up, you will get more heroes free. You don’t need to spend crystals to summon heroes! However, if you want, you can. Initially, it is very easy to defeat the enemies. But as you progress, the game will be onerous and it would be hard to strike down the rival team.

And at the beginning of the game, most of the features are locked; base, fever mode, extra cards, base defense, and much more. When you unlock the town hall to level 3, defense settings gets unlocked. You can assign giants to defend the resources. You can level-up giants, towers, and improve the base defense to avoid getting looted by opponents. In short, at the beginning of the game, you might feel it’s very easy game. But it’s not! To progress fast, build the party of best heroes, increase the base defense, a proper guide & strategy is required. Let’s start the Giants War guide and after it, check out Giants War tips, cheats & strategy to master the game!

In this part, we will learn about heroes, evolving, cores, fever mode, base, giants, rank-up, extra cards, finisher skill, battles, PvP, buffs, looting, and much more. Make sure to read everything 😉 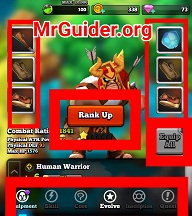 Heroes, the main characters in Giants War game. Your objective is to build the team of best heroes(at least 3-stars heroes, as soon as possible). In the battle, you can choose up to 5 heroes. But at the beginning of the game, you have only two heroes. As you progress and clear an area on the world map, you can summon a free hero.

Go to the telepod-> summon -> free summon. The player can also use crystals to get a new hero. It costs you 1,000 crystals. I would recommend you don’t waste your crystals in summoning heroes, because you will get free when you clear an area on the world map.

You can check the list of all heroes featured in Giant War game, go to the world map -> at the bottom-left corner, tap the hero icon. You will get your first 3-star hero before level 10. 3-stars heroes have better stats than 2-stars heroes. So, try to build the team of 3-stars heroes. How to do that? You can transform a 2-star hero into 3-star hero by evolving. Read the evolving guide below.

Now, let’s learn how to increase the combat rating of your heroes: –

It’s very easy to obtain the equipment in Giant Wars game. All you need to do is go to the world map -> explore a particular area -> tap the equipment card. That’s it. When you equip the heroes with equipment, their stats get improved.

Ranking up allows a hero to equip high-quality gears. And it also increases the hero stats. How to rank-up?

It’s very easy. All you need to do is equip a hero with 6 equipment. After it, you can craft or produce high-quality gears and equip them to increase hero’s stats.

In the battle, your heroes attack enemies automatically. But you have full control over their skills. When a hero is fully charged, you can use its skill to deal massive damage.

To increase the skill stats or to unlock new skills, go to the hero tab -> select a hero -> head to the skill section -.> there you can spend Ether to upgrade skill or to unlock a new skill.

Tap the skill icon to check what’s it. 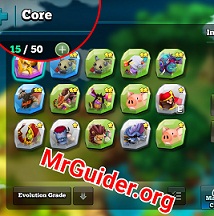 The core is one of the important items in Giant Wars game. It is used in increasing the combat rating of a particular hero. In Giants War game, you can equip a hero with 3 cores. However, to unlock more slots, you have to evolve that hero.

Go to the hero section -> head to the core tab -> then tap on an empty slot and choose a core. The core is of many types: –

A-Rank cores are the most powerful cores in Giant Wars game because these cores can significantly increase the combat ratings of a particular hero.

You can check all the cores you have by tapping the cores icon at the bottom-right corner on the world map. Tap a core and choose upgrade, then select low-quality cores for upgrading.

The cores used in upgrading will be destroyed. You can summon cores using crystals. Go to the telepod/shop tab -> summon -> summon cores.

The core is used in evolving. But it should be of the same character’s type. For instance, Human Warrior is a character in Giants War game, to evolve it, Human Warrior core is required. How to get cores?

You can get cores by defeating the boss in boss battles. Or you can also summon cores using the crystals. Evolving will raise the star level and increase the hero’s stats.

An Inscription can enhance a hero’s abilities. You can obtain it by meeting Soldria the Tatto Artist during an exploration.

So, these are the ways to increase a hero’s power in Giants War game. Whenever you get stuck, try increasing their power.

So, this is the hero guide. Now, let’s learn the Game Screen guide; if you don’t know about PvP, Defense, Base, Base Defense, Cards, Buffs, Fever Mode, Extra cards. You can skip this part and move to the cheats, tips part below if you already know about these things.

There are three places in the game where you often visit; Base, World Map, and Telepod. 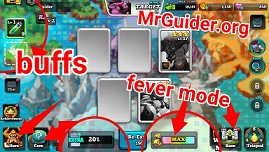 At this place, you can access features; heroes, cores, buffs, fever mode, extra cards, PvP, looting, and much more.

Heroes and cores guide is already discussed above. Let’s learn about other things. At world map, you just have to select an area and explore. Exploring costs you gold coins. Gold coins can be obtained as a reward.

When you explore an area, you get cards; these cards include;

NPC Characters are; Witches, Magic Merchants, Alchemist, Tatto Artists. These characters provide you buffs. To get buffs, you need crafting material. When you tap the card(NPC Characters), there would be a shop option, you can buy material from there. Then deploy a free hero and get the buff in 10 minutes.

On the world map screen, at the top-left[see the picture above], there are two icons; scroll and ether. Tap the icon and choose the buff. For instance, by activating fierce scroll buff, all the heroes of your party will deal 5% more damage.

During an exploration, you could get looting opportunity; you will be able to attack other players’ base and loot their resources. Similarly, other players can also attack your base. Make sure to improve the defense. 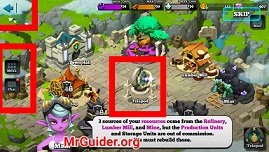 These resources are required to upgrade the town hall and add defensive items to your base. You can add towers and appoint giants at these production centers.

Dark Energy is required in research; by researching you can activate passive boosts. For instance, increase the deal damage of the heroes.

Enemies can steal your base’s resources; so, make sure to add towers, upgrade towers, upgrade giants. But if you keep your defense good, they can’s steal! Beginner? -? This feature gets unlocked when you reach the town level 3. The tap one of the production buildings -> defense settings -> add a giant.

So, this is the basic base guide.

Here you can summon heroes, cores, and collect supplies. These supplies include items like ether, gold, and much more.

The fever mode gets activated when you fill the fever gauge[see the above picture-world map]. It can be done by skipping. For example; in area 3 or high, when you re-explore, you get cards; some of these cards include enemy cards. When you tap the enemy cards, you can start the battle. You don’t have to do this. If you don’t fight against enemies and re-explore, you will earn stars. Gather enough stars and fill the fever gauge.

At the left side of re-explore button, you can see the extra bar. The rate of bar determines the chances of getting an extra card during exploration.

Because you will get a free hero every time you clear a new area. And if you go for manual summon, it will cost you 1,000 crystals. So, it would be better to save crystals to summon cores.

As stated above, the cores are used in evolving and in increasing combat rating of heroes. So, it would be better to summon cores using the crystals. Read the cores and evolving guide above.

#3.) Build The Party Of Strong Heroes, Here’s How

You should focus on developing the heroes. Don’t wait for new heroes, the heroes you get for free are great. Start their development, here’s how: –

Read the guide above to know how to increase the power of heroes in Giants War game.

If you have any questions, you can contact us. So, these are some Giants War tips, cheats & a Giants War strategy guide for the beginners. Download Giants War game – Here(Google Play Store). Also, see – Best strategy games for Android