iCandy(the creators of Light A Way, Crab War) with Joyseed Gamertribe has recently released a new Idle game for mobile devices Hollywhoot: Idle Hollywood Parody. In this game, your role is of a director and the objective is to become popular. Hire casts, publish movies, release TV shows, and make money. Its concept is similar to the Vlogger Go Viral game, but with unique character evolving feature. In this post, we have covered everything about the game you need to know: Hollywhoot guide and Hollywhoot tips, cheats & strategy.

Get Started – The Basic Hollywhoot

Before we head to the cheats, tips & strategy guide part, let’s learn the basic of the game. In Hollywhoot game, your one and only objective is to become a popular director. And to become a popular director, casts should be good. And to hire good casts for the movies, a huge amount of money is required. At the beginning of the game, you have one cast available for free. You can hire more by using coins. And at the beginning of the game, only one studio is free. So, you can produce one movie at a time. To produce multiple movies, you can buy more studios(as per the current version of the game, it costs you 100M coins and 200 gems). Level-up and access to new features; research, TV Shows, store, and more.

You can upgrade the casts using coins and evolve them to increase the profit on movies. So, this is the basic Hollywhoot guide for the beginners. Now, let’s start the Hollywhoot guide and after it, check out Hollywhoot tips, cheats & strategy.

In this part, we will learn about the casts/academy, studio, TV Shows, evolving, movies genres, research, prominence, and more.

As stated above, to produce a movie, you need to hire casts. First one is free. You can unlock more using coins. As you level-up, you can choose multiple casts for a particular movie. The profit from movie depends on the star casts and their perks.

If you choose a better cast, you will earn more. You can check the income of a star cast under the Academy tab. Tap on its icon to check its perks. For instance, Sick Ass is a character and when you choose it to produce an action movie genre, you will earn 10% more income.

You can check the perks of a character and its evolution tree by tapping the search icon(at the top-right, near gear icon). Upgrade the star casts to earn more income in Hollywhoot game.

You should choose the genre of movie wisely; depends on the star casts; because it determines the income. Read the Hollywhoot cheats, tips & strategy guide below to learn about this.

After a certain level, this feature gets unlocked. Here you produce TV shows and earn passive income; you don’t need to tap the screen, it’s automatic. You can reduce the time or increase the income by upgrading the TV shows; reach the milestone levels; 10, 25, 50, 100, and so on. It’s the only sources of passive income.

After a certain level, research feature gets unlocked. When you evolve a cast or get a new cast by evolving, you earn stars. You can check the number of stars you have on the top-left side of the screen. You can spend these stars on research and unlock boosters; more income by producing movies.

You can evolve star casts and earn more money by giving them a role in your movies. Just upgrade and reach these levels; 100, 300, 600, and so on. Evolving a star cast increases the income and perks. 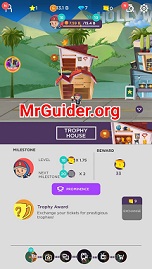 Once you reach level 19, this feature gets unlocked. It’s like prestige. What is it?

Read the Hollywhoot cheats, tips & strategy guide below to use this feature like a pro!

A special boost gets activated once you reach the milestone level; 10, 25, 50, 100, 200, 250, and so on. Go to the academy tab and upgrade the casts to reach these milestone levels. Once reached, train them and get a special bonus.

2.) Tap the delivery boy on a scooter

You will often see a delivery boy driving a scooter on your screen. Tap on it and he will gift you a special box and you could get; a huge amount of coins, free gems, boosters, and much more. It is one of the best ways to obtain free items in Hollywhoot game.

To increase the amount of income from movies, you should upgrade & evolve the casts. It costs you one-time investment and with this one-time investment, you will earn a lot. Evolving unlocks a new character and you get free perks.

4.) Choose Star Casts On The Basis Of Genres

As stated above, In Hollywhoot game, you should choose the genre wisely to earn more. Do A/B testing and select perfect casts for a particular genre. For example; you may earn more from the action genre as compared to comedy genre with same stars. It is because of character’s perks. For instance; Kevin Hard is a character. If you choose him for the comedy movie, then you will earn more. But if you choose him for drama, then you will earn the base income(check the base income under the Academy tab). So, choose the perfect characters for a particular genre to earn more and take advantage of perks. Tap the search icon at the top-right -> tap the character -> check its perks.

Gem is one of the rare in-game items in Hollywhoot game. And you should not spend it in useless tasks like the bundle of coins, a stack of coins, and more boosters. Use it to unlock the studio. Here are some ways to get free gems in the Hollywhoot game: –

As you know, In Hollywhoot, TV shows generate passive income for you, even when you are not playing the game. You can claim the offline earnings by tapping the coins icon(round shape) on your mobile screen.

You can use it multiple times and earn golden tickets. When you start the game again, use these tickets to buy trophies and unlock permanent boost; for instance, 75%+ income from TV shows. But make sure, when you use it again, the number of golden tickets should be double. For instance, for the first time, you get 33 golden tickets. Next time, use this feature when the reward amount reaches 60+ tickets. To increase the amount of reward, upgrade the casts, level-up, research, buy new TV series, and make more money.

So, these are some simple Hollywhoot cheats, tips & a strategy guide for the beginners. Also, see- Best Idle games like this one