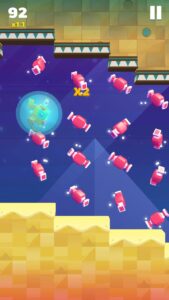 Jelly Copter is a new arcade endless game for Android from the creators of Subway Surfers game. In Jelly Copter game, you control one of your characters/helicopters and compete with others for the top rank. Our Jelly Copter cheats, tips, and tricks will help you to top the leaderboard

Jelly Copter game is now officially available worldwide. It was in soft launch in selected countries since 2017. And it is from the creators of Subway Surfers, the game which crossed over a billion downloads on the mobile platform and still getting hits. Let’s hope Jelly Copter will soon touch this milestone. Unlike Subways Surfers, it is not an endless runner game. In this game, you choose one of your helicopters to play the game, complete missions, level-up, collect candies and other fruits and avoid crashing. It features many types of obstacles and traps, characters, and much more. Let’s take a look at Jelly Copter cheats, tips, and tricks+game overview. Also, see – Best Arcade games for Android

In Jelly Copter, you fly through a world of candy and the only goal is survive as long as you can, avoid crashing, traps, and obstacles. The controls are pretty simple to handle; you just hold your finger on the screen to fly your character, release the finger to go down, tap & tap slowly to maintain the speed in a specific side. Jelly Copter game features lots of characters and you can unlock all the characters in Jelly Copter game by collecting the tokens. Also, see – Top new Android games 2018

All Characters In Jelly Copter Game

The player can unlock these characters in Jelly Copter game by collecting the tokens. Tokens can be collected by completing the missions, using spin wheel feature or as a reward.

If you want to break your own record or highest record in Jelly Copters game, you need to practice a lot. Controlling the character is not an easy task, because, you have to face sudden obstacles and traps. Playing Jelly Copter game with soft hands helps in controlling the character tightly. On the other hand, if you hold on the screen tightly, chances are you might strike with walls. So play the game with soft hands; the reason is sudden obstacles. You can check your score or highest score in Jelly Copter game by taping on the leaderboard option or just go to Google Play Games app – Jelly Copter – Leaderboards – High Score. Currently, at the time of writing this article, it is 1,041. That’s great!

In Jelly Copter game, you have to collect candies because you can use candies to get the headstart, lives, tokens, and much more. But if you want to put the high score on the leaderboard, you should ignore candies which are in risky place. Always collect those candies which can be obtained easily. On the other hand, if you are chasing for each candy, then it would be difficult to put the high score because collecting candies from the risky areas increases the chance of crashing! So don’t be greedy and collect those which can be obtained easily.

3.) Other Fruits are also important

Apart from candies, there are also other fruits such as pineapples, grapes, strawberry, and more in Jelly Copter game. If you are only collecting candies and ignoring these fruits, then you are doing wrong! Collecting these fruits increases the score points and you will be able to put a decent score on the leaderboard. For instance, collect pineapple and you will earn 20 score points. So all other fruits are also worth collecting.

4.) Be aware of crazy pick-ups

In Jelly Copter game, you can use revive/lives/hearts/save me feature to continue playing the game even after crashing. So save me helps you to put the high score on the leaderboard. Now the question is how to get free save me/revives in Jelly Copter game. There are a number of ways; grab them if you see while playing, use spinning wheel feature, connect the game to your Facebook account.

Before you start the game, take a look at your missions. Completing these missions level-up your profile and you will earn rewards such as tokens to unlock characters in Jelly Copter game, candies, headstart, or lives. Leveling-up also increases the speed of your character.

Tokens are required to unlock new characters in Jelly Copter game, one of the best ways to acquire these tokens is using spin wheel feature. You can use this feature to get free lives, tokens for characters, candies, and much more. To use it, you can watch a video ad or spend fifty candies.

As you know, to use spin wheel feature, you need to spend fifty coins. So candies are also important in Jelly Copter game. You can collect candies by playing the game and double the numbers by using candy booster; before you start the game, go to the main screen, tap on the *2 candy option, watch an ad and double your reward. You can also double the reward which you get using spin wheel feature by watching a video ad.

To get hundreds of candies, dozens of lives, headstart for free in Jelly Copter, you should connect it to your Facebook account. It is one of the best ways to get free lives/save me in bulk without spending real money. Just go to characters section ->officer sprinkles -> free -> connect to Facebook -> claim your free reward.

To put a high score on the leaderboard, use headstart booster and start the game with a jet speed. You can get the headstart from the spin wheel feature, as a reward, or by connecting the game to the Facebook account. Use Save Me to continue playing even after crashing. Grab the shield and give your character a temporary protection.