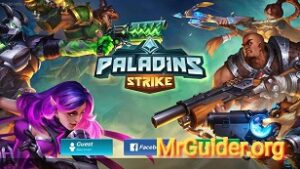 Paladins Strike is a new MOBA game for Android by Hi-Rez Studios in which you choose one of your best champions and battle against other players in real time 5V5 combat. Check out our Paladins Strike cheats, tips, and the strategy guide to get more kills and best characters

Hi-Rez Studios’ latest Moba Game “Paladins Strike” has finally launched for mobile devices. The game features more than 15 characters, lots of game modes, and much more. You start from the bronze league and compete with other players for the top rank to grab precious rewards for free and jump to high-leagues for better rewards. In this post, we have covered everything about the game; Paladins Strike cheats, tips, and Paladins Strike Guide, strategy to dominate the battle. Let’s start with Paladins Strike guide;

Get Started – The Basic – Paladins Strike

As usual, Paladins Strike game starts with a tutorial and tutorial covers the basic of the game and guides you about the controls, battling system, attack, skills, and much more. After the tutorial, you have to manually take care of all kinds of upgrades, champions, and all things.

The Basic Of Paladins Strike Game – In this game, you fight in a real-time 5v5 combat where both teams have only one objective; capture the points and defeat the enemies. Before the battle starts, the player has to choose one of the best champions for the battle; after it, you enter the arena and help your teammates in defeating the enemies and dominating the battle. However, it would not be easy. You may have lots of questions about the characters, battle, and modes, we have covered everything here;

Each character has own unique weapon, skills, and talents. At the beginning of the game, most of the characters are locked and you can unlock new characters daily from the store for free.

In Paladins Strike, there are three types of runes;

To upgrade the characters in Paladins Strike, you need runes.

There are two range of runes;

Each character has unique talents. For instance, basic attacks reduce healing by 50%, critical damage increased to 200%, basic attacks deal 30% more damage and more. You can choose a talent in the battle to take advantage,

How to activate a talent?

Leveling up activates a talent! You can level up 5 times and each time you level up you can choose from a set of two different talents.

You choose the best hero for the battle on the basis of the attribute;

After you start the battle, you have to choose a champion and choose it quickly because you can not pick it if any other team member selects it. Then you have to capture the objective, you will see it on the map(at the top-left corner), start moving to it and dominate the battlefield. 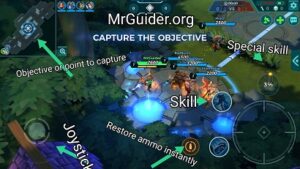 At the left side, use the joystick to move your character. At the bottom-right side, there are combat controls; attack, skill, restore the ammo, and more. Check out the Paladins Strike cheats, tips below to master the game!

2.) Get Free Five Chests Daily By Completing The Daily Quests 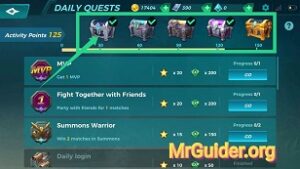 As you know, to unlock high-level bundles, you need to level-up. How to level up fast? To level-up, you need EXP[Experience points], two ways to gather EXP;

How to perform better in Paladins Strike?

How to get more kills, reduce the number of death, and deal more damage?

In the store, some items can be purchased using in-game currency “gold”. You can use gold to obtain a free rune chest or cores. If you have enough coins, then buy it and upgrade the characters using runes.

Golden box – It’s like a luck-draw feature, you can obtain universal cores, mega rune chest, tickets, and crystals for free in Paladins Strike game. Go to the store -> golden box -> spend and test your luck. You could get crystals, mega rune chest, and other precious items for free without spending real money.

6.) Get premium skins and characters free in Paladins Strike Game

There is another lucky-draw feature; available only for 14 days[when you install the game], it is login reward draw – go to the store -> login reward -> draw -> you could get premium skins and premium characters for free. What is skin? If you equip the skin to a character, that character will get the advantages such as rune bonus, gold bonus.

If you sign-in with Facebook Account or Hi-Rez account, you will get a premium skin on the next day. On the main screen -> go to the sign-in tab and claim the free reward.