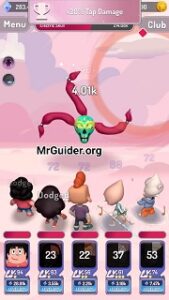 Basics – Get Started – How To Play Steven Universe Tap Together Game?

Before we head to the cheats, tips part, let’s learn the basics. In Steven Universe Tap Together game, you build the party of cute characters and fight against enemies. Basically, you tap the screen to attack the enemies. Characters included in the party attacks automatically. If you want to defeat the enemy fast, then start tapping on the screen. You earn crystals or XP by defeating the enemies in the battle. Use XP to level the characters. When a character’s level increases, it will deal more damage and take less damage. Here’s the walkthrough guide that covers how you progress in the game: –

Steven Universe Tap Together game starts with a tutorial in which you learn how battle mechanics work; how to add characters to the team, use hero’s skills, how to deal more damage to the enemies, and more. After the tutorial, you will have to manage all the activities such as party management, heroes, skills, rank up, and more manually.

All you need to do is complete the stages, defeat the boss in boss fights. As you progress, the difficulty level will increase by a lot. And here comes the upgrading, power-ups, skills, and items part. You will have to power up the heroes in order to strike down epic bosses. And when you complete the stage 7-1, a new feature called supercharge gets unlocked. It could be difficult for beginners to figure out how this game’s mechanics work; how to collect characters, rank up, fragments, supercharge, item set, skills, and more. But don’t worry! We are here to share an ultimate Steven Universe Tap Together guide for the beginners. Also, see – Top new Android games

In Steven Universe Tap Together game, we can choose up to five characters in our deck; these members attack the enemies 24 hours a day and help you by collecting XP all the day. By default, the game gifts you six characters(complete the tutorial). And all these heroes have unique special skill. For example; Steven has healing skill; restores the HP of partners. Let’s learn step by step: –

How To Get Characters In Steven Universe Tap Together game?

To unlock more characters in the game, you need to farm or collect the fragments. Fragments? You can obtain these fragments from the case(from the shop), chest(use supercharge feature), and by defeating the boss. For instance; To unlock Onion, you need 70 fragments of Onion character. After collecting all the pieces/fragments, you will be able to unlock it. Go to the menu -> heroes -> there you can see the list of characters and the number of pieces required to unlock.

In the fight, you tap the character icon to activate the skill. All the characters have unique skills. Head to the menu -> heroes -> tap on a hero to visit its profile page. On the profile page, under the skills section, you can check all the skills. Now you may have one more question; how we can unlock skills? Here’s the answer: –

How To Unlock Skills?

Rank Up is a process through which a player can increase the grade of a hero. For instance; 2-star character to 3-star. How to rank up heroes in this game? Well, it is very simple. All you need is duplicate fragments of that character. For example; if you want to rank up Steven, then you need Steven fragments/pieces. How to obtain:  Case, Boss Fight, and Stage Chest. Go to the character’s index (menu -> heroes) -> tap on an unlocked hero -> on the next screen, just below the stars, you can check the number of pieces/fragments required to rank up.

In Steven Universe Tap Together game, items such as guitar, harpoon gun, metal mutt, and many more toys are the equipment of characters. When you equip these items to the characters, their stats such as defense, damage power, XP drop rate gets increased. Go to the hero’s profile page and under the item set section, you can check the list of items which can be equipped with the characters. Items also have grade; depending on the tier; there are seven tiers. Tap on an item to check the tier rank. High-rank items provide the massive boost to the hero’s stats.

How To Upgrade The Items?

Like rank up process, the player can upgrade the items’ rank by gathering its fragments. When you have enough, head to the hero’s section -> tap on a hero -> item set -> tap the item -> upgrade -> confirm.

Fragments – How To Obtain For Free?

In the shop menu of the game, you can claim free case multiple times a day(next after every certain amount of time). This case contains; power-ups, character fragment, item fragment, battle tickets and many more precious items.

Or spend coins in the shop to get the premium case.

In other Idle games, this feature is called as prestige. And if you have ever played games like Idle Factory Tycoon, Idle Miner Tycoon, and more, then you can easily understand it. Let’s get started: –

You can use this feature after clearing the stage 7-1. When you reach this stage, go to the menu -> adventure. There you will see stage chests. These stage chests contain rare fragments; items as well as hero fragments. Hit the supercharge button to get these items and fragments.

But when you use this feature, you will lose the current progress;

But these things will remain unchanged: –

Battle Ticket is an in-game item which is used to play multiplayer boss battles. You get free battle tickets every day(3). After consuming the free ones, the player can buy more using the shop.

In the multiplayer mode, you team up with club members and fight against the boss. Win the multiplayer battles to get free items, hero fragments, and much more. On the main screen, at the top right, tap the club option. Join an active club. Once joined, head to the social tab -> create the game -> start the battle. After it, claim the rewards.

List Of Characters In Steven Universe Tap Together Game: –

Steven Universe Tap Together game features a variety of power-ups that help you in defeating the boss in the epic boss battles. These Power-Ups include damage multiplier, super team shield, super instant XP, and more. You can obtain these power-ups by watching a video ad(after losing the battle in the boss fight, tap the “fight monster” button just below of stage bar. You may get the offer to get power-up by watching a video ad). Or sometimes, you get these power-ups by tapping the flying whale. Flying whale appears after every few minutes, keep an eye on it and grab the free items; XP, Power-ups, and more.

You can increase the stats of all heroes together by filling the bonus bar. Go to the menu -> heroes -> under the hero roaster section, there would be a hero level bar. Fill this bar’s gauge by leveling up the characters and when it reaches the maximum point, all the characters will gain the special bonus.

You should take boss battles seriously as it’s not easy to win against the powerful bosses. Pay attention to the red circles and lines; hold down on the circle to block the enemy attack and deal counter attack. If you see a line, then swipe on the screen. And in the multiplayer battle, rapidly tap on the circles.

There are a number of benefits of joining a club in Steven Universe Tap Together game; you will be able to play multiplayer mode with teammates and as a reward, you get valuable items. Additionally, by joining a club, you can enroll yourself for season rewards. At the end of the season, on the basis of the club rank, you get free rewards; fragments, items.

#5.) Supercharge To Get High-Tier Items

If you want to progress fast, then you should try it. You will lose stage progress, XP, hero’s level progress, but in return, you get precious items, used to enhance the stats of heroes. Go to the hero’s info page -> under the item set, tap on an item -> equip. Use the navigation keys to switch to high-tier items set.

But make sure to use it at the right time. For example; for the first time, you use this feature on stage 7-1. After it, use it when you pass stage 8, 9, and so on. Otherwise, you will get old items again

So these are some basic Steven Universe Tap Together tips, tricks, and a complete beginner’s guide. Also, see – Best Idle games for Android