It does not matter which character you have opted in Versus Fight game. Our Versus Fight tips, cheats & strategy guide will help to win the battles

In the recent post on Versus Fight game, we shared a detailed guide(check here) that covers all the aspects of the game related to the battle & characters. Make sure to check it if you are having trouble understanding the game’s mechanics. In this post, we have shared some Versus Fight tips, cheats & a strategy guide for the beginners to win the battles.

Versus Fight game is very dynamic. The opponent can turn the match with one move. And any wrong move by you will lead you to the loss. In the battle, you should know about four things; if you get to know how to control these things, it will be very easy to get the victory. 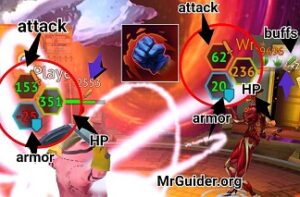 In the battle, make sure to keep an eye on all these stats in order to play the turn wisely.

And it’s enough to play the turn wisely.

#2.) Know The Cards and Balance The Deck

In Versus Fight game, as you progress to new or higher leagues, new cards get unlocked. But make sure to balance the deck or battle set. If you don’t know how to edit the battle set, then read the guide here.

And to build the balanced battle set, you should know about the cards or moves. Go to the moves screen(battle set), tap the card and read how it works. For example; Cheer Up is move or card in Versus Fight game that can increase the HP in the battle.

Demote card/move can remove positive effect(s)(buffs) from the opponent. Envy Card/Move increases the attack power upon each move played by the opponent. Bleeding is another card that can reduce the HP of the opponent(3 turns).

So it would be better to know about the cards you have added to the battle set. And on the other hand, if you play or pick any random move in the match, then it may lead you to the loss.

How to build a balanced deck?

#3.) Upgrade the moves or cards

It’s a common thing you have to take care of in any game like this. Upgrading! Without upgrading, you can not win against a powerful enemy even if you are properly implementing the strategy. Read the guide(link is given above)to learn how to upgrade.

#4.) Equip The Gears To Increase The Stats

In Versus Fight game, gears can increase the stats of characters: –

To make the character stronger, you should craft the gears and equip them. Read the guide to know more.

Keep in mind that if you lose the match, you will lose the gear. You can obtain gears from the loot boxes or craft the gears.

As you know, most of the precious items can be obtained from the loot boxes only. And these loot boxes take too much of time to get ready to open. And you get free loot boxes every day after a certain amount of time.

You can watch the video ad and reduce the duration. Just tap the loot box and hit the skip button.

#7.) Grab the daily deal before it ends

Every day, new items go on sale and you get the opportunity to grab them at the cheapest rate. Go to the shop tab -> daily deals -> from there you can purchase cards(to upgrade cards), items, and much more in exchange for coins and crystals. You can learn about the items in our guide.

Sometimes, you receive free rewards in the inbox. At the top of the screen, tap the inbox/message icon to check it.

At the bottom menu, go to the last tab to access clan feature. Join a clan and then you will be able to exchange moves/cards with members and earn precious gears or boxes+access to the clan war feature.

So these are top 9 Versus Fight tips, cheats & a strategy guide for the beginners. Read the Versus Fight Guide here. Download Versus Fight game – Here(Google Play Store).