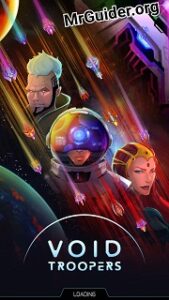 iCandy, the publisher of Light A Way and Crab War game, recently released a brand new Idle game that challenges you to conquer the galaxies by defeating all the galaxy bosses. And we are here to help you to accomplish this task by sharing a beginner’s Void Troopers guide and Void Troopers cheats, tips & strategy. We have divided this post into two parts: guide and tips & cheats. Make sure to read both parts.

The Basics – How To Play Void Troopers

If you have ever played games like Cash Inc, Videogame Guardians, Guava Juice Tub Tapper, then you can easily understand the mechanics of Void Troopers game. In the game, you just tap the screen to attack enemies. The enemies come in waves and after a set of waves, you will conquer a part of a galaxy. And after conquering all the parts or stages, you will have to defeat the galaxy boss in the battle to move on.

And at the end of each part(set of waves), you battle against the boss. Defeating the waves of enemies reward you coins and the player can spend coins in upgrading ships or on skills. You can also send crews on the expedition and they will bring precious items such as coins, crystals. Once you reach the galaxy 5, you will be able to use time travel feature. Time travel guide is below. This feature allows the user to reset the game progress for time orbs, it means when you use this feature, you will earn time orbs. Time Orbs is a precious item featured in Void Troopers game to buy technologies. By purchasing technology, you can increase the damage power of main ships or for another bonus. In short, you will get a special boost.

In this part, we will learn about the ships, expedition, ships, special abilities, time travel, time orbs, and much more.

At the bottom of the screen, there are some tabs. Head to the 2nd tab and there you can access to the ships. First one is your main ship and rest ships can be unlocked using coins. When you upgrade the ships, the damage bonus gets increased. Hired ships automatically attack the enemies. But your main ship does not shoot until you tap the screen. So, when you leave the game, hired ships continuously defeat the enemies for you and when you come back to the game, you can claim the offline earnings.

At the bottom of the screen, head to the 3rd tab to access abilities feature. Void Troopers game features awesome abilities and using at the right time helps you to defeat the boss in the boss battle. You can unlock abilities by spending coins. Once unlocked, you will see the ability icon just above the bottom menu. Tapping that icon casts the skill. For instance: – Nuclear Slavo is an ability that helps you by dealing 150% damage to the enemies. You can read the info in the abilities menu. After one time usage, you will have to wait for few minutes(cooldown time). That’s why you should use the special ability at the right time. Upgrade the ability to deal more damage.

You can send candidates on the expedition and they will bring precious items for you like a bunch of coins, crystals. Go to the 4th tab and there you can see the list of candidates. Conquer the galaxies, level up to get more candidates. Tap the send button next to a candidate and choose a location. You can also see the duration of the expedition. After this certain amount of time, claim the reward and send the candidate again. It is one of the best ways to obtain free crystals & coins in Void Troopers game.

Time Travel feature let the player claim time orbs. Go to the first tab to access time travel feature. There you can see the number of orbs you have. You can earn more by defeating the boss, conquering the galaxies.

Once you reach the galaxy 5, you can claim time orbs. After it, the progress will reset; main ships, coins, crews, abilities. But in return, you will get orbs. Go to the first tab again and under the technologies section, you can buy a technology.

Make sure to check the available technologies section too. Because you can choose one of these techs in exchange for orbs. For instance; for the first time, it would be Primary Cannons, Fleet Ammunition. Primary Cannon technology increases the tap damage while fleet ammunition increases the feet(hired ships) damage. It would be better to choose fleet ammunition because it will increase the damage bonus of all the hired ships.

#1.) Look for the meteor for the precious item 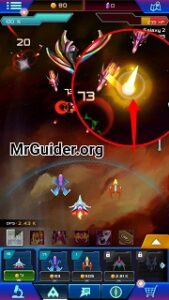 Sometimes, a meteor appears on the screen. Tap it and you will get an ad offer. Watch the video ad to get the reward. But keep in mind that, sometimes a blue meteor also appears and tapping it will give you a premium offer like activate the abilities in exchange for 100 crystals. Don’t buy it.

In Void Troopers game, one of the best ways to earn crystals is playing the daily carrier mode. In this mode, you fight against a boss and upon victory, the game will reward you crystals. On the main screen, on the left side, tap the creature icon and start the fight.

At the left side of the screen, there would be a C icon. Tap it and activate the Gold Influx by watching a short video ad. In return, you will obtain 50% more gold coins. And as you know, coins are used in upgrading. So, it’s worth activating. This buff lasts long for 1 hour. Watch again to extend.

Go to the shop tab and there you can claim a free reward after every hour.

Void Troopers game features lots of ships and you can unlock them using coins. Upgrading the ship increases the deal damage per second. But don’t stick to a specific ship. Unlock new ship as soon as possible because new ships deal more damage and you should focus on their upgrades instead of upgrading initial ships.

At level 500, you will get a special bonus and it will increase the damage rate of that ship by a massive amount.

#6.) Use the special ability at the right time

After one time usage, you can not use ability instantly. So, it would be better to use the special ability when you are having trouble defeating the boss or galaxy boss. Don’t use it blindly. Special ability guide is above.

#7.) Send the candidates on an expedition

Go to the expeditions tab and send the candidates on the expedition. After a certain amount of time, they will come back to home base with coins or crystals. Collect the items and re-send. It’s free. If it’s taking a long time, speed-up the process by watching a video ad.

Well, this feature can boost or speed-up the progress. But the wrong usage of it will make the progress slow. First of all, you should check the available technologies and their cost.

If you have enough orbs to buy available technologies, then go for it. And it would be better to unlock new technologies. Make sure to check the feature of technology; tap damage 100%+ or -5% upgrade cost, +25% gold drop etc. Then go for it. 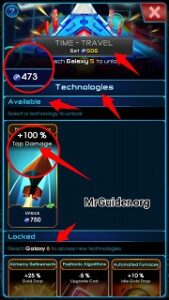