Wars Of Glory is a brand new war strategy game for mobile devices by Elex. Check out our Wars Of Glory guide, tips, cheats & strategy

Elex, the creators of Food Fantasy game, has just released a war strategy game for mobile devices and it challenges you to dominate the world by defeating the rival kings in war battles. If you have ever played games like Rise Of Civilizations, Mafia City, then you can easily understand the Wars Of Glory game’s mechanics. But if you are playing this type of game for the first time, then you may encounter a number of problems regarding defense and attack. But don’t worry! We are here to guide you! Today, In this post, we have covered everything about the game you need to know as a beginner; Wars Of Glory guide and Wars Of Glory tips, cheats & strategy.

Basic – How To Play Wars Of Glory Game! 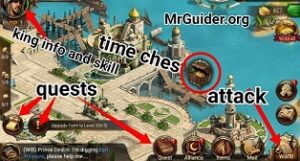 Wars Of Glory is an online war strategy game in which the player play as a King and all the players fight with each other for resources. All you need to do is build a strong army of troops and plant defensive facilities in the city to strike down the intruders trying to steal the resources. In the first event of the game, you follow the tutorial and build farm, sawmill, mines, and many more facilities. After it, you build training camps(barrack) and train the units for the battle. Then you head to the world map and defeat monsters or other player’s base. After the tutorial, it’s up to you to manage all the things manually and wisely in order to progress fast.

Here’s the step by step guide: –

At the top-left corner of the main screen, you can check the power of the city. To increase the power, you need to build and upgrade the facilities and train the troops. And building, upgrading, training, researching, and all these activities require resources; food, wood, gold, iron, and more. You can produce these resources in the production facilities such as a farm, mine, sawmill, and more. But there is one more way and that is stealing from the rivals. You can attack the city of other players and loot the resources. Similarly, enemies can attack your city for the resources.

And if you don’t want to lose the precious resources, you should improve the defense of the city. In short: –

So this is the basic Wars Of Glory guide for the beginners. Now, let’s check out the Wars Of Glory ultimate guide and then read out our cheats, tips & tricks.

In this part, we have explained everything in detail and it will surely help you in building the best city.

In Wars Of Glory, the palace is the core of the city. To unlock or plant new buildings in the city or to increase the power, you have to upgrade it as soon as possible. As per the current version of the game, the maximum level of the palace is 30. Upgrading also increases the gathering speed of resources such as food, wood. Additionally, you unlock new features, buffs, and buildings.

There are four resources in the game; Iron, Food, Wood, and Mithril.

You need these resources to build and upgrade the buildings in the city. You can build these production facilities such as sawmill, farm, mines, and more outside the palace. Unlock new areas to plant more facilities. Read the tips, cheats part below to learn how to increase the production rate. Keep in mind that other players can loot the resources if the defense of your city is poor.

To attack a monster on the world map or raid a city, you need to train the troops. You can train troops in these buildings: –

And in the Siege Eng. Factory, you can train siege equipment; Assault Cart, Battering Ram, Demolisher, and more.

How To Unlock New Units Or Troops?

The player can increase the attributes of troops; attack, defense, and HP by promoting them. Just tap the building, select the unit -> hit the promote button.

How To Train More Troops In Training Camps?

If you upgrade or build the military tent, you will be able to train more troops at a time.

Heroes are another main characters in the Wars Of Glory game. You can deploy them along with the army when going to march. Let’s learn how to obtain heroes!

You can summon a hero for free through common recruitment every 10 minutes. Keep in mind that the possible rewards also include speed-ups. Keep trying and you will gradually get a hero.

And you can summon a hero for free through advanced recruitment every day. Once recruited, you will be able to add him/her in the squad.

How To Use Skill Points?

You can use these skill points in activating the buffs/talents. For example; you can increase the building upgrade speed by activating the development talents. On the main screen, at the top-left corner, tap the King’s portrait. On the next screen, at the bottom-right, tap the book icon. After it, choose a category; support, development or combat. Tap on any talent and learn. You can upgrade these talents too.

As you know, we can activate the permanent bonus or buff by activating the talents. Another way to activate buffs, powerful bonuses is by researching. In the college building, you can research a number of buffs. Head to the college facility -> research -> choose type(resources, military, defense, development) -> after it, tap the icon and start researching.

There are a number of buildings in your city and you should know about all. Here’s a quick overview of all the buildings: –

Make sure to join an alliance and participate in the quests. You will get free rewards, help from the alliance members, and many more benefits. At the bottom of the main screen -> tap the alliance option -> join or create. To quit, go to the manage tab in the alliance menu -> then tap the quit button. 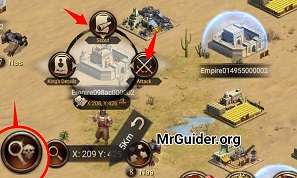 At the bottom-right corner, tap the world map icon. You can hunt monsters, raid on the enemy city, and gather the resources from the world map. Just tap the search icon and choose what you want to do. If you want to hunt monsters, then select the monster, adjust the level and hit the search button. To attack an enemy city, search the palace on the map -> tap it -> attack. On the next screen, select the hero or troops you want to send and then tap the march button. Keep in mind that you would not be able to attack a player if its palace has an active shield.

1.) Increase The Defense, Here’s How

If you don’t want to lose the resources, then you should pay attention to the city’s defense. There are a number of ways to increase the defense of the city: –

2.) Collect The Time Chest After Every Five Minutes

This time chest rewards precious items to the player. You can claim it after every certain amount of time. Where is it? Near the watchtower and event facility.

3.) Use Items You Get As The Reward

The player gets a number of items by completing the quests, side-quests, daily missions, and by hunting the monsters. Head to the items tab and there you can check out the items you have in the inventory. Resources items are used to obtain resources such as food, wood, iron, and more. Speed-Ups are used to reduce the building upgrading time. In short, pay attention to all the items.

Before you raid on a city, make sure to get all the details; the power of the enemy, troops, heroes, defense, and much more. When you tap the enemy city/palace on the map, you get an option; scout. Choose this option and send the units to get details about the enemy. You will get the report in the mail menu. And in the report, you can check out all the information about the King; power, troops, and defense status. If its power is very high, then don’t march. Otherwise, you will end up with a big failure and lose so many troops.

5.) Increase The Power, Here’s How

You can increase the city’s power by: –

You can build the wishing well once you reach the level 8. Go there and claim the free rewards. You can wish for free for a certain number of times. After it, you can spend gold or use blessing item. Blessing item can be obtained from the time chest. At the top-right corner in the wishing well building, tap the hand icon and use.

There are three types of quests; chapter quest, main quest, and the side quest. Complete all these quests to get free rewards. And in fact, it is one of the best ways to progress fast in the Wars Of Glory game.

In the hospital, you can heal the troops. Upgrade the hospital facility to treat more number of troops at a time or build more hospitals in the city.

So these are some Wars Of Glory tips, cheats & a strategy guide for the beginners. Also, see – Best strategy games for Android