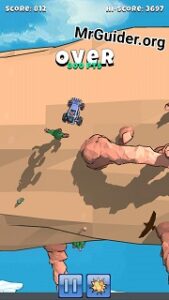 Wheely World is a simple arcade game in which the player controls the vehicle and compete against other players from all over the world for the top rank on the leaderboard. Wheely World game features three unique worlds and in each world, you have four choices in the vehicles. All you need to do is beat the high score and top the leaderboard by beating the rivals. Today, In this post, we have covered everything about the game you need to know: Wheely World tips, cheats, tricks & strategy guide to master the game.

Before we dive into the cheats, tips, and tricks part, let’s learn the basics first. In Wheely World game, your objective is to drive the car as long as you can without crashing. It seems easy, but, it’s not. Let’s learn the controls; hold down on the screen and drag left or right to move the vehicle. Release the finger to go straight. At the top-left corner of the screen, you can check the current score. And at the top-right corner of the screen, you can check the high score. To make the high score, drive the car without crashing(avoid hitting the objects).

Wheely World game features three worlds; Desert, Hill/Mountain, and Island. You can change the world by tapping the map icon on the main screen, bottom-left corner. And at each world, the game offers you four choices in the vehicles. You can change the vehicle by tapping the garage icon on the main screen, bottom-right corner. Tap the trophy icon(top-right corner) to check the highest score made by other players. Let’s check out how to make the high score in Wheely World game.

1.) Collect The Crates To Get More Points

Only dodging and surviving will not grant you more points. With this strategy, you earn fewer points. If you want more points, then grab those yellow crates on the map. These crates also activate special power-ups such as flight, monster, jump booster, speed booster, and more. 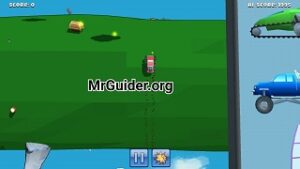 Playing this game in portrait mode is a little bit annoying. We would recommend you to switch to the landscape mode by rotating your phone as it gives you a much wider view. And you will be able to focus on driving. And it also helps in dodging the obstacles. Also, see – Top best new Android games of this month

3.) Jump Over The Objects

4.) Go Down From The Objects – Under Stunt 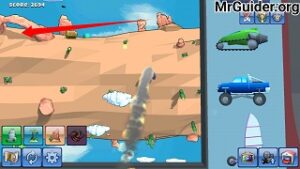 In the desert map, you can go through(under) the rock hills. And it gives you over 600 points. Sometimes, you even get over 1000 points.

5.) Pass Through The Edge To Get More Points

Near Miss- You will get more points when you pass through the edge of the objects(trees, rock hills). However, it might increase the chances of crashing. But if you have mastered the control, then it would be easy for you.

6.) Get The Exclusive Vehicles Free

Wheely World game offers one vehicle to the player for free in each world. You can unlock the locked vehicles by spending the real money or get the trial. Just tap any locked vehicle and tap the trial option -> watch the video ad and unlock all the premium vehicles for free.

So these are our top Wheely World game tips, tricks & a guide for the beginners to earn more points in the game. Also, see – Best arcade games for Android