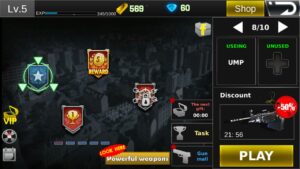 Zombie Sniper Evil Hunter is a brand new offline shooting game for Android in which your one and only objective is to slay down the zombies. It features lots of game modes; endless, adventure, chapters & levels, and much more. Most of the game modes are locked at the beginning of the game. You can unlock these modes by leveling-up your profile; just complete the initial levels. In this post, we have covered everything about the game; Zombie Sniper Evil Hunter cheats, tips and guide. Let’s start the Zombie Sniper guide first;

In this game, you play as a hunter and your goal is to slay down all the zombies. However, it would not be easy for you, since zombies are very powerful. Initially, its levels are easy, but, later, it becomes more challenging and addictive. There are various types of zombies; fast, attack from range, powerful, wolf zombie and many more featured in the game. As usual, it starts with a tutorial in which you learn about the basic of the game; how to play, shoot, and much more. After the tutorial, the player can manage all the things independently. The gameplay; your character moves automatically and stop at a fixed spot, from there you have to shoot down all the zombies;

Zombie Sniper Evil Hunter Guide -> Just hold down on the left side of the screen and swipe to adjust the camera view, at the bottom-right side, there are attack controls; fire, zoom-in, reload, and skill. Just point to the zombies and tap on the fire button to shoot down a zombie.

The gameplay is good, it has good graphics, levels are neither too difficult nor too easy; balanced, it’s perfect! Overall, it’s a great zombie shooting game for Android; good for time pass. Now let’s start the Zombie Sniper Evil Hunter Tips, Cheats, and tricks 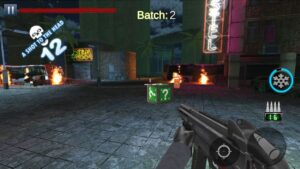 After you start the battle, look for loot boxes; these boxes contain HP boosters, gold, and much more. To open these boxes, aim & shoot with your gun and collect the loot. Since you cannot move manually in the game, you have to open it as fast as you can before your hunter move to next phase. Gold is one of the main In-game currencies in Zombie Sniper Evil Hunter game, so, don’t forget to open these loot boxes as you might get a huge amount of gold for free.

2.) Shoot Down The Zombies In Bulk By Destroying Tanks 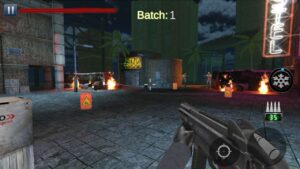 Look for the oil tank around you and fire on it when a huge number of zombies are close to it. This will vanish the whole wave in a single shot. To take advantage of these tanks, you should shoot on them when a number of zombies are close to it. On the other hand, destroying it for two-three zombies would be useless. In short, slay down the zombies in bulk by destroying these tanks.

Zombie Sniper Evil Hunter game features a lot of guns. However, you need diamonds & gold to unlock these guns. Each gun’s power is different; ammo, headshot, damage power. As mentioned above, it becomes more challenging after you clear the initial stages and it would be hard to clear high-levels without a powerful gun; there are two choices;

Another option is; save the gold by not upgrading current guns and buy a powerful gun.

In both cases, you are in benefit. Now, it’s up to you “how you use your gold”.

Gold is one of the precious resources in Zombie Sniper Evil Hunter game, used in upgrading & buying guns. There are a number of ways to obtain gold for free;

Headshot is the most effective shot to slay down the zombies instantly; you earn more XPs, points on headshot. Tap on the zoom-in option and point to the head & shoot.

Each gun comes with a special skill; for instance, machine gun’s skill freezes the zombies for a few seconds, Scattershot’s skill releases an alarm clock bomb that attracts zombie and generates a wide range of the explosion. To activate a skill, just tap on the skill button[just above the reload button]. You can not use it the unlimited number of times. So, use it at the right time; when the situation is out of control.

So these are some Zombie Sniper Evil Hunter tips for the beginners. Download the game – here[Google Play Store]. Also, see – Best Zombie games for Android 2018