Are you guys looking for IPL cricket game to play on your mobile device? Check out this list of top new best IPL Cricket Games for Android 2018 and download your favorite one; play as CSK, RCB, MI, Hyderabad, Delhi, Kolkata, Rajasthan, and Kings XI Punjab team players

Mobile gaming is getting bigger and bigger. That’s why nowadays, developers prefer to develop mobile games rather than console games. Come to the point; IPL Cricket games 2018; after searching a lot, I have prepared this list of IPL Cricket Games 2018, let’s begin without wasting the time 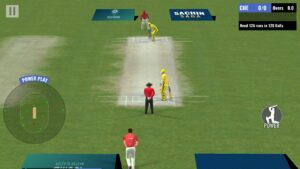 Sachin Saga is one of the best IPL Cricket games for Android 2018, featuring all the Indian Premier League teams; updated teams & players, night matches, and much more. Previously, you can not play it offline and there was no IPL Mode. But now you can play it offline and IPL mode is there. You just go to cricket league tab, choose your IPL team and defeat the opponent by chasing the target within the limited balls. You will enjoy the true T20 experience on your mobile screen by playing this game mode. Additionally, its graphics, player animations; movements, entry, exit, fielding, gameplay, and everything is great. Download – Here(Google Play Store). Also, see – Sachin Saga Game updates 2018 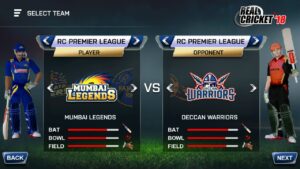 Real Cricket 18 is another one of the best IPL Cricket games for Android. It is currently in beta, but still, you can enjoy the IPL mode; just tap on the quick match banner; change the league to RC Premier League and choose your IPL team and the opponent IPL team and then choose the 20 over mode. That’s it. The gameplay is similar to other matches, you can bat as well as bowl; the true T20 game experience on the mobile screen. In the upcoming update of Real Cricket 18, we are getting auction feature; time to bid on players! Download – Here(Google Play Store). Also, see – Real Cricket 18 Updates 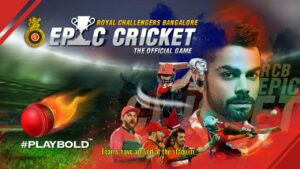 RCB Epic Cricket by Nazara games is another IPL Cricket game on our list. If you are a fan of RCB team, then you should give it a shot. It features three modes; multiplayer, tournament, and events. In the event mode, your goal is to achieve the target and you will compete with other players for the top rank. In the tournament mode, you play back-to-back matches against other IPL teams for the IPL trophy. It is a fast-paced IPL cricket game, specially made for RCB fans, you should give it a shot. Download RCB Epic Cricket game – here[Google Play Store]. Want to know more about this IPL game? MG Coverage – RCB Epic cricket launches on Android by Nazara Games

WCC 2, one of the popular cricket games also features the IPL mode. Go to the tournament section -> league -> Nation League – Indian. However, you need 4,00,000 coins to unlock this mode. If you have, then unlock it. If not, then play other game modes of the game and earn coins. Once you have enough, unlock it and enjoy the IPL cricket game on your mobile device. I have not tested it as I have only 2,00,000 coins. Just play the T-20 matches, it’s free. Download – here(Google Play Store). Also, see – Top new best Pokemon games for Android 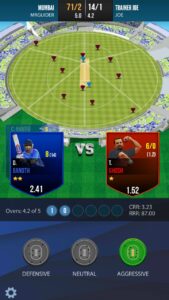 Hitwicket T20 Cricket Game 2018 is another one of the hit cricket games, the latest update to it brings IPL mode. It is different from all other cricket games mentioned above. In this game, you bid on players, train the players, compete with other players. In short, it’s a cricket manager game in which you build your best T20 cricket team and use the best strategy in a unique gameplay to defeat the opponent. I would recommend you to try it, it’s really great. Type – Online. Download – Here[Google Play Store]. 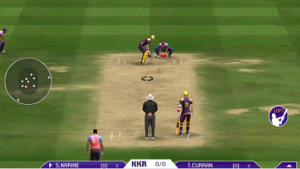 KKR Cricket 2018 is a new and one of the best IPL games for Android, by Indiagames Ltd., the creators of Cricket T20 Fever 3D game. You play as KKR, it features quick match game mode, play 2 or 5 or 20 over matches. In event mode, you have to complete a specific objective; score a certain number of runs in a specific over, take a wicket, and more. You can bowl as well as bat. The graphics are cool, gameplay is OK[Not outstanding]. It’s worth a try. Download – Here[Google Play Store]. It’s an online cricket game, you need an active internet connection. Also, see – Best offline games for Android 2018 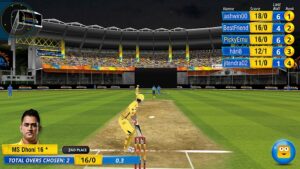 Battle of Chepauk 2 is a brand new and one of the best IPL games for Android and iOS. It has been developed by the creators of WCC2 game. Battle of Chepauk 2 game features four game modes; Super Multiplayer, Super Over, Super Slog, and Super Chase. In Super Multiplayer mode, your objective is to top the leaderboard; all you need to do is score more runs than the opponents. In Super Over, you have to complete a challenge. And In Super Slog mode, your objective is to hit six and four only. In Super Chase mode, your task is to clear all the levels. The graphics of this game are OK, it’s a fun game; with fewer features and more fun. You can move your batsman; left, right, swipe where you want to play the shot. That’s it. Download – Here(Google Play Store).

So these are some IPL Cricket games available for Android to download for free. We will update this post regularly to provide you latest and updated content. In my opinion, Sachin Saga is best. Also, see – Top new Android games 2018