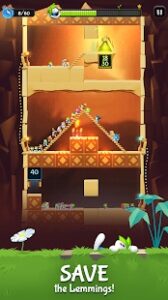 Let’s find out the top new arrivals on Google Play Store and play something new & unique. In this article, check out the top best new Android games 2019

The creators of Plague Inc game has just released a brand new simulation game Rebel Inc on Android. Rebel Inc released for the iOS late last year. Now, it’s available on Google Play Store for free. You can play it offline. The size of the game is around 100 MB. In the game, your objective is to stabilize the country by implementing various tactics & strategies. Download – Here(Google Play Store). It is one of the best new Android games 2019(February).

Nick’s Night Out is a free-to-play fast-paced adventure game for Android by Apex Chimps, the creators of Detective Max game. In the game, you will help Nick to get back home. All you do is solve the puzzles, use items, interact with characters and complete the short adventure. Download – Here(Google Play Store).

QubeTown is a farming simulation type game for mobile by Webzen. You need an active internet connection to play this game. In QubeTown, the player builds & decorate own town where he/she can cultivate crops, pet animals, trade resources, and develop it by installing loads of facilities for the residents of the town. It’s way better than other farming simulation games; cute graphics, characters, loads of things to do/discover/manage. We would recommend you to give it a try if you are looking for a simulation game. Download – Here(Google Play Store).

Langrisser Mobile is another one of the best new Android games 2019, published by ZlongGames. Most of its functions(Related to upgrades) are same as other RPGs. But the battle system is pretty unique and challenging; you deploy the best heroes on the battlefield, manually move on the cells and attack the enemies with their basic/special skills. You will start the journey from chapter mode and as you progress, you will unlock PvP, event, and guild dungeon modes. Download – Here(Google Play Store).

NetEase’s Cyber Hunter has finally released for Android on Google Play Store. Previously, it was named as Project Battle. If you don’t know about the game; it is similar to fortnite battle royale game where you will fight for the survival and try to be the last one standing. The graphics of Cyber Hunter are amazing. The only problem is it is in soft launch and might not be available in your country. The size of Cyber Hunter is over 1.5 GB. Download – Here(Google Play Store).

King Crusher is an offline and one of the best new Android games 2019. It features two game modes; classic and adventure. In the adventure mode, you will visit a number of places and defeat the monsters with the help of heroes. In the classic mode, random enemies will challenge you for the fight. The battle mechanics are also pretty simple; you just dodge the enemy attacks by moving the character to a safe grid and the heroes in the squad attack the enemies automatically. You can use the spells to deal damage, for buffs; healing. Its size is around 75 MB and available for free. Download – Here(Google Play Store).

MU Origin 2, the sequel to hit MMORPG is now officially out on Google Play Store. The sequel lets you play as an archer, a mage, or swordsman in a variety of game modes; PvP, quests, events, and more. The battle system is idle in nature as everything is auto. But in some of the game modes, you will have to control the character manually. Its download size is over 1.3 GB. Get It From – Here(Google Play Store). And, yeah! VIP system is also there.

Elex, the publisher of Food Fantasy game has just released a brand new survival adventure game for Android. Named as Fallen World, it challenges you to survive in a deadly environment, full of hungry dinosaurs & challenges! You will construct the shelter from scratch using natural components and tame the dinosaurs + there are loads of things to do; gathering, crafting, building. Get It From – Here(Google Play Store).

Remember the NetEase game “THE DAY AFTER TOMORROW”? It’s now out on Google Play Store, but the English version is not available. It’s an open world survival RPG with breathtaking graphics and survival; gameplay. Download – Here(Google Play Store).

So these are the top new Android games 2019. We will update this post next week.