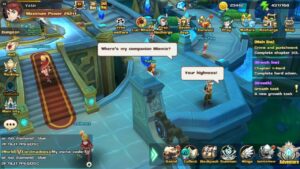 1.) Get Started – The Basic – Fantasy Legend War of Contract Game 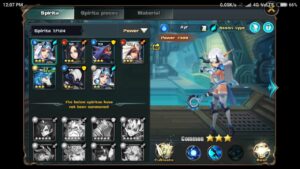 It starts with a tutorial in which you learn about the basic of the game. The tutorial covers; how to play Fantasy Legend, about upgrading, summoning spiritas, gears, and much more. You start the game from Adventure Mode. At the beginning of the game, most of the game modes are locked. To unlock these modes, you have to level-up your leadership, can be done by playing adventure mode. The adventure mode has two sub-modes; normal and hard. In the normal mode, you face low-level enemies. In the hard mode, enemies’ strength is really strong. To switch to hard mode, go to adventure -> at the top right corner -> choose hard. Getting three stars in hard mode is not too easy. If you want a big amount of rewards, then you should play the hard mode.

The Basic -> Before you start the battle, the player has to choose its best allies for the battle. The gameplay is similar to other turn-based strategy games; you just tap on the enemy to attack. One of the important tasks is using the skills at the right time and on the right enemy. Using the best strategy, you can easily achieve three stars at every stage. Let’s begin the Fantasy Legend War of Contract guide;

In Fantasy Legend War of Contract game, characters are of five types;

As it is a turn-based strategy game, the power of your team[all characters] matters a lot. Getting legendary allies is not a big deal if you don’t waste precious items; diamonds, summoning items in useless tasks. You can obtain legendary Spiritas for free in many ways; using the pray features(main screen -> at the top right), as a reward, by completing the chapters, and more. However, it would not be easy. And also you can use summon feature; use your diamonds, summonore item to obtain these allies.

You can check Fantasy Legend War of Contract tips below.

Starsoul -> You will get this item as a reward, after summoning. This item increases the stats of your team; HP, attack, defense, and much more.

Main Screen -> at the bottom-right -> collect -> Starsoul -> tap on the glowing sphere.

Rewards Sections -> Welfare, mail, quests[at the right side of the screen, tap on the messages].

As mentioned above, it’s not easy to obtain legendary characters. So, it would be better to enhance your characters using the starise feature. You need starise material to use this feature and your character should be on its max level. After it, go to character’s info -> cultivate -> starise -> confirm.

Awaken is another one of important features in the Fantasy Legend game. By Awakening an ally, you can greatly increase its power to a next level.

So this is the Fantasy Legend War of Contract guide. Let’s start the tips, cheats, and strategy now; 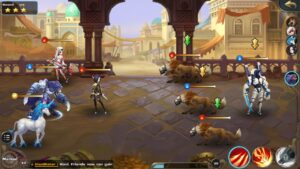 1.) Increase the power of your allies

If you are not increasing the power of your allies, then you can not defeat the powerful enemies in hard levels. There are a number of ways to increase the strength of characters in the Fantasy Legend game;

Focus on all the upgrades or maintain all kinds of upgrades; your allies and gears to defeat the powerful enemies in hard levels.

2.) Use Pray Feature to get legendary Spirita/Ally

Try your luck and use the pray feature to obtain a legenadry[5-star] character. On the main screen -> look at the top-right menu -> pray -> spin it by tapping on the pray button. That’s it. You can not use it an unlimited number of times. After one time usage, you have to wait for hours.

In the battle, take a look at your enemies; just above the enemies, you can see the arrow; green, red, and yellow. The characters are of many types; fire, water, wind, and more.

⇒ Don’t use your special skill at the beginning of the battles, use it against the last enemy/main enemy. [except boss fight].

To earn more rewards such as gears, diamonds, gold coins, play the levels again and use these items in upgrading.

5.) Watch the ad for diamonds, coins, or summoning item

At the main screen -> tap on the video icon[first icon] and watch a video ad for the precious item; diamonds, gold coins, or summoning item.

So these are some Fantasy Legend War of Contract tips cheats and strategy for the beginners. Download the game – here[Google Play Store]. Also, see – Best strategy games for Android