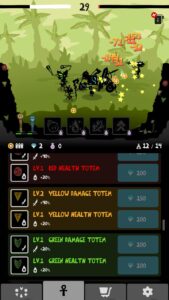 UGA-CHA is a new simulation game for Android by 111% in which you defeat hordes of enemies with the help of UGA. If you don’t know much about UGA-CHA game, then this UGA-CHA game guide will help you to play it like a pro and use these tips, cheats to defeat the boss without spending real money

UGA-CHA is a new Idle game for Android from the creators of BBTAN game series and it is really an amazing game in which you have to use the best strategy to build the strongest team of UGA characters. It becomes more addictive and challenging after clearing the initial stages and one of the best things in UGA-CHA is you can get all type of In-game currency for free. This UGA-CHA game guide will help you to master the game like a Pro! Also, see – Best Idle games for Android 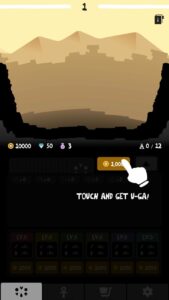 As usual, it starts with a tutorial in which you learn about the basic of the game; how to play UGA-CHA, upgrade cards, and much more. After the tutorial, you can play it manually and manage all kinds of activities independently. Let’s start the UGA-CHA game guide: – 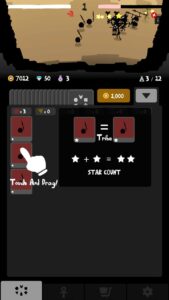 In the game, you buy UGA cards, UGA Cards are of many types; red, yellow, purple, green, brown, and more. To increase the power of UGA, you have to upgrade your cards and it can be done by merging. Just drag and drop over the same level card. For instance, I have a red card(2 stars) and to upgrade it to level 3(3 stars), I need two level 2 red cards(2 stars).

You have to build the strongest deck to defeat the enemies and the boss. Just buy more cards, merge them, and increase their power using diamonds.

Coins used in buying UGA cards, diamonds used in increasing the power of UGA cards, and potions are power-ups which temporarily boost up the strength of UGA.

There are four tabs at the bottom of the screen; on the first tab, you can manage buying, selling, and upgrading of UGA cards. Go to the second tab and from there you can purchase useful items; Gold totem, gem totem, and access rebirth feature. The third tab is shop section and from there you can buy cards, potions, and remove ads.

Potions are of four types; speed-up, healing, meteor, and power-up. Using these potions, you can defeat the boss in boss fights. These potions can be obtained by watching video ads.

If you have got the same level cards, then merge them to increase the power of UGA.

⇒ After completing the 10th stage in UGA-CHA game, you can use rebirth feature. Using rebirth feature, you can earn a huge amount of gems/diamonds for free. Go to the second tab and tap on rebirth and confirm. This will reset your progress and you will get gems. After the rebirth, go to the second tab and purchase gold totem, gem totem. Gold totem gives you free coins after every few seconds, gem totem gives you free gems after every few seconds. You can reduce the time by upgrading totems under the second tab.

⇒Use the rebirth feature 2-3 times and upgrade your totems and stats of cards under the second tab. Earn gems as much as you can.

⇒Always keep an eye on your UGA Cards, buy more, merge them and if you have reached the maximum limit, sell the low-level cards and buy more(In case you have no merging option).

⇒You can increase the damage power and heal power of UGA cards using coins and gems. Upgrade your UGA Cards continuously to defeat the hordes of enemies.

⇒Potions are very helpful and increase the chance of getting the victory in the boss fight even if your UGA team has low power in comparison to the boss. So buy potion by watching video ads.

⇒Whenever you get defeated, you will see the video ad option, grab it and watch the video ad, you might get tons of gems, potions, and coins for free. Don’t miss this golden chance.

⇒If you are still struggling and not getting the victory, then check your UGA cards, if merging is possible, do it. Increase the damage power of UGA Cards, use potions at the right time, buy more cards, and repeat the normal process.

So this is the UGA-CHA game guide and UGA-CHA game cheats, tips, and strategy to defeat the hordes of enemies. It is really a great addicting game for Android and you should give it a shot. The best thing is you don’t need to pay for anything, everything can be earned by playing the game. Download UGA-CHA game – here(Google Play Store). Also, see – Top new Android games today