Versus Fight is a brand new online multiplayer action game for Android by Azur Interactive Games Limited. Check out our Versus Fight guide to master the game

Azur’s latest multiplayer action game Versus Fight is now available worldwide for all the players and challenges you top the leaderboard in the higher league. Versus Fight game features three game modes; challenges, story, and real-time 1v1 PvP mode. Along with these fun game modes, the game also features the dozen of characters, skill cards, gears, and items. And in this post, we have covered everything about the game you need to know: Versus Fight guide: Deck, Characters, Buffs, Items, Gears, and much more. This guide covers almost all the aspects of the game that you should know.

1.) Versus Fight Basic Guide – How To Play

In Versus Fight game, your main objective is to defeat the opponent as fast as you. The game starts with a tutorial that covers basic concept. But it does not cover all the aspects like upgrading, deck, buffs, gears, and items.

The battle system is quite simple and easy to understand. In the battle, you use skill cards to increase the attack, HP, armor strength or to remove or add buffs. It costs you mana that re-generates after every turn. After it, you hit the attack button. The player who loses all the HP first will be defeated. Upon victory, you will earn trophies. Gain more trophies to access more features. Along with trophies, you also get loot box that contains in-game items.

If you get defeated, then you will lose trophies, gears. As you progress to the higher leagues, you will battle against pro players. However, it would not be easy, but, the amount of reward will be high. So, this is the basic Versus Fight Guide for the beginners. Now, let’s learn more in our Versus Fight ultimate guide that covers characters guide, items, gears, crafting, deck, upgrading, buffs, and much more.

When you start the game, you can choose any one of these heroes. The game features a wide range of characters and all the characters featured in Versus Fight game have different stats and special advantages.

As you can see in the above table, all the characters’ stats are different and all have at least one passive skill advantage that activates in a certain condition. For instance; Nightmare’s passive skill; While having 30% or less HP, this character’s every hit will be critical(exceptional; buffs).

You may want to know the best characters in Versus Fight game. Well, it depends on the player’s style. You can increase their stats by leveling up, upgrading the cards, and using buffs in the battle. Here are some recommendations-

It would be better to choose either Heap or Guard. Keep in mind that you can not unlock all the characters for free. The first one would be free. Some characters get unlocked once you gain enough trophies. While some characters can be purchased using crystals. Also, see – Best action games for Android

On the main screen of the game, at the bottom menu, head to the fourth tab(character icon). There you will see the list of characters and their stats. Swipe to see more. Tap a character you want to select. And hit the select button. If it’s locked, then you will have to spend the crystals.

You can create a deck or battle set of eight cards. You use these cards in the battle. For instance; there is a card in the Versus Fight game named Smash. When you use this card, it increases the attack or damage power of your character. Similarly, all the cards have different outputs. It would be better to check out all the cards you have.

Go to the main screen of the game. Tap the character and on the next screen, at the bottom, there would a battle set section. Tap one of the cards to go to the editing screen. After it, drag and drop the cards from or to battle set. You can create three battle sets with different combinations.

You can increase the effect of cards by upgrading. For instance; upgrade the smash card to increase the damage power. To upgrade a card, you need duplicate cards. Open the loot boxes to get cards. Once you have enough, go to the battle set, tap the card which is ready for the upgrade. It costs you coins. 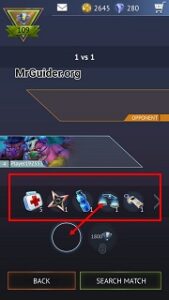 There are many add-ons/items are featured in Versus Fight game. Before you search the opponent(battle), you can select these items(drag & drop). You can obtain these items from loot boxes.

Gear is one of the precious items in Versus Fight game. Once you gain enough trophies, you will be able to craft the gears. These gears can increase the attributes(HP, Damage, Critical Hit, Dodge, and more) of the character.

To craft the gear, go to the craft machine tab(first one, at the bottom menu). After it hit the craft button. It costs you coins. Once done, you will get the gear.

To equip the gear,  go to the main screen -> tap the character. On the next screen(character’s info), under the “equipped” section, tap one of the empty slots. Drag & drop the gear to equip. You can equip multiple gears once you have enough number of trophies. 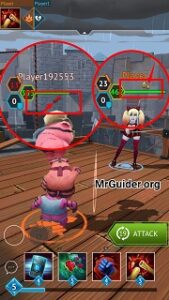 In the battle, buff cards are used to take bonus advantages. For you, it would be buff. For the opponent, it would be debuff. The green icon next to the player’s stats(in the battle) shows the number of buffs. The red icon states the debuff.

You can choose a certain number of cards for the battle even if you have a wide range of cards available to choose from. To unlock new cards, reach the higher league by obtaining trophies in 1v1 mode.

So this is a short Versus Fight guide for the beginners. We will soon post Versus fight tips, cheats, strategy(just search using the search box). Download Versus Fight – Here(Google Play Store). Also, see – Best war games for Android