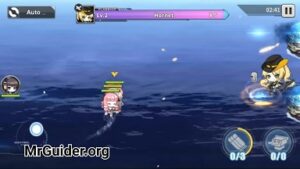 Azur Lane is a brand new warship game for Android and iOS. You can now pre-register it to get exclusive rewards at the time of launch

After 5 days, the OBT of Azur Lane game will start and those who were eagerly waiting for the game’s release, can now pre-register it for the exclusive rewards. Azur Lane is a side-scrolling game for Android and iOS in which the player controls a squad of shipgirls in the ocean and evade enemies.

The English version of the game is going to release on Google Play Store and iOS in coming days. You can pre-register for it at their official website. Visit the website, hit the pre-register button, and enter the email address. You will get the notification when the game goes live. Now, let’s talk about the game. Here’s Azur Lane game overview;

It starts with a tutorial in which you learn the basics of the game; there is a joystick control option at the bottom-left side of the screen that you use to control the shipgirl(warship girls); dodging, aiming etc. All you need to do is shoot down the enemy fleet as fast as you can. At the bottom-right side of the screen, there are skill options to deal massive damage to the enemy side.

After the tutorial, you have to make a choice; choose one shipgirl out of available choices. After it, you learn how to start the battle; basically, you build the ships, add them into the fleet/formation, and evade the enemies. Upon victory, the game will reward you items such as gears, material, and much more which you use in upgrading or enhancing.

The Characters; Azur Lane game features a wide range of cute girls; you can get the characters from the story/adventure mode or by building ships; heavy, light, special. In short, the character farming system is same as other games; pretty good though!

The gameplay is not boring as you have full control over the characters; dodge the enemy attacks, use skills, and shoot them all. If you love side-scrolling shooting games, then you will love it. Just head to their website and pre-register for it. They are aiming for 50,000 registrations. You can get the JP version of this game from APKPure if you want to try it right now. Its size is around 700MB. So, that’s all for now. We will share the guide, tips, cheats of this game soon on our website 😉