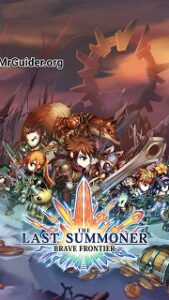 Brave Frontier: The Last Summoner, the sequel to Brave Frontier game has been just released for Android on Google Play Store by gumi Inc. However, as of now, it’s available in four countries; Philippines, Netherland, Sweden, and Newzealand. If you want to download it right now, then check out this guide in which we have explained how to download games from Google Play Store, not available in your country(soft-launched). Let’s check out the game overview!

It’s an online action-packed JRPG for Android in which you build the party of brave heroes and take them into the battle to strike down the beasts or monsters. Its initial size is 100MB(Approx.), but additional files will be download after the tutorial. In the tutorial, you learn the battle system which is pretty unique. 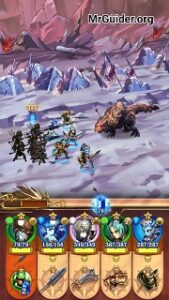 At the bottom of the screen, there is a squad panel where you can see the heroes/hero-party. To attack the enemy, you have to swipe horizontally. You can change the hero’s skill(that you want to cast) by swiping vertically. At the end of turn, you earn battle crystals(brave skill cost). After defeating the hordes of beasts, you fight against the mighty boss. You will definitely love it as it is not ruined with auto-play crap. You have full control over the characters; choose any skill, target a specific monster.

The game uses the energy system, and it’s way too low. You may not like it. Other things such as graphics, gameplay, music, animations are pretty good. Character upgrading system is like other games; you take them into the battles, earn EXP, reach the maximum level, train them, evolve them and build the strong party.

Brave Frontier: The Last Summoner game features plenty of game modes; PvP(25v25), PvE/Story, Events, and more. And all the game modes are very challenging and addictive; even initial levels. If you love strategy games, then you should give it a try. And if you have played the original version of the game, then you should play the sequel; it’s pretty good.

The game is now live on Google Play Store and as of now, it’s not in the app store. Download Brave Frontier: The Last Summoner – Here(Google Play Store). If it’s not available in your country, then you can download the APK from APKPure or check out our post: –