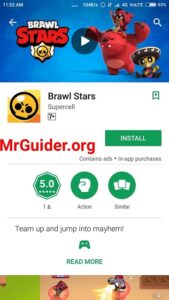 Hello Supercell Fans! Here’s an intersting story for you. Brawl Stars is finally available for Android in selected countries; Hong Kong, Macau, Malaysia, Singapore. But if it’s not available in your country, then don’t worry, we will guide you how to download Brawl Stars on your Android easily, like a pro! But make sure to read this post completely and you are good to go. So, let’s get started.

One day ago, the twitter handle of Brawl Stars posted a tweet, hinting the Android soft launch release and a user replied or stated that it will release tomorrow, and boom! It’s now available in selected countries. The size of Brawl Stars game for Android is 74MB.

Well, currently I’m in India and it’s not available in my country. But!!!! You can download it using a VPN called Tunnel Bear. At the time of writing this post, it’s downloading. We have a decent post on “How to download games not available in your country”, you can check that post ⇒ Here. If not working, then drop a message at [email protected]

However, it’s working fine for me. For those who are unfamiliar with the game; It’s a multiplayer action game, featuring real-time 3v3 battle mode. You choose one of your brawlers and strike down the enemies in a maze type battle-field.

Well, these game modes remind me another soft launched game “Dank Tanks”. Dank Tanks is similar to this game; similar modes, 3v3, cute characters, and much more. You can read more about that game here.

If you are from USA, UK, India, Australia or any other country, then either wait for the official release in your country or use the above method(link is given above – Install games not available in your country). We will update this post with more information soon.