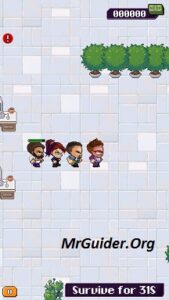 Squad Rivals is a brand new mobile game by BroadbandTV Corp, the creators of Fernanfloo game. Check out our Squad Rivals game overview

Squad Rivals game starts with a tutorial in which the player guided through various aspects of the game; how to play, collect rewards, quests, upgrading, healing, and much more.

The very first step you have to do is go to the office and tap the roll button. This will determine the mode, loot, and difficulty level. After it, you tap the next button to attack enemies. You will have to complete the goal; on the basis of mode. For instance, if it’s survival mode, then you will have to survive for a certain amount of time.

Before you start the battle, you can change the squad; add or change the character. Then just hit the start button to enter the battlefield.

You just swipe or tap there where you want to navigate the squad. Your character attacks the enemies automatically when in range. All characters have different stats; some character can attack from a range while some can not.

After it, you will be rewarded with a parcel that contains characters and many more items.

Check the jobs, complete them, earn rewards, if one of the characters has injured, then revive it or wait for some time. Upgrade the characters to increase their stats!

As you progress, you will be able to play new game modes, access more features; arena, mall, and many more.

During the battle, destroy the objects and you could get bucks, power-ups. Squad Rivals game features dozens of power-ups such as invisible, shield, car, bombs, heals, magnet, and many more.