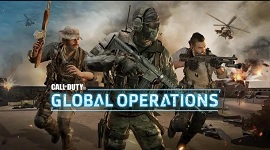 Call of Duty: Global Operations is a new mobile game by Elex, featuring Call of Duty characters and MMORTS mechanics. Here’s all you need to know

Elex, well known for Food Fantasy and other MMORTS games, has just released the Android version of Call of Duty: Global Operations on Google Play Store. Announced in the march, the game debuts this month in selected countries as a part of the beta test. In Call of Duty: Global Operations, the player builds the military base with all essential facilities and invade enemies. If you have ever played Clash of Kings, then you can expect its gameplay.

In Call of Duty: Global Operations, your role is of a general. And as a general, it’s your duty to manage all kinds of activities; recruiting the commanders(Call of Duty Characters), training troops(air units, tanks, infantry, and more), increasing the power of military base, maintaining the resources, and many more.

The gameplay is quite similar to other MMORTS Games; you will send the troops on the march to invade the enemies and loot their resources. Use the looted material in developing the military base and increasing the power.

It also features Call of Duty characters; Soap, Price, Shepherd, Ghost, Sandman, Judge, DeFalco, Griggs, Killer, and more. All these characters have special abilities which boost the troops’ strength. Before you send the army to the march, you can choose these characters.

YOUR MAIN TASKS IN THE GAME

In Call of Duty: Global Operations, you will gather the resources from the world map; from resource stations, invading enemy’s base. You need these resources to develop the military base’s building, in researching, and training.

Army Building – To strike down the big players’ base, you will need to build an army of troops. The more troops you have, the more dangerous you will be. Upgrade the training facilities and unlock high-level troop units and improve the defense.

Researching – Researching is another common task in this game. You will need to research to unlock or access to locked features, units and to activate the passive buffs; increase in attack power, defense, production of resources.

Call of Duty: Global Operations also features the campaign mode that lets you understand the basic concept of the game and helps you in forming tactics with the commander combination. In the Co-Op mode, you will team up with clam members to raid on a specific target for better rewards. You can also help the members by reinforcing, donating, and raiding.

Basically, it’s same as other MMORTS games, with Call of Duty cover. Graphics are good. You can download the game from Google Play Store – Here(Link to Play Store). Also, see – Top best MMORTS games for Android