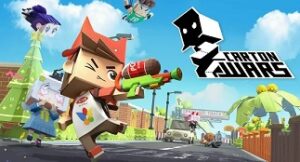 NetEase has just released a brand new battle royale game for mobile and it is named as Carton Wars. Here’s everything you need to know about Carton Wars

Carton Wars game released on 18th October 2018, On Google Play Store. But at that time, the game was only available in the Philippines. NetEase has just expanded the soft launch by soft launching the game in Singapore, Malaysia, and Indonesia. As of now, it’s only available on the Android platform. NetEase is also working on Cyber Hunter, King Of Hunters. This is the latest battle royale game from the creators of Knives Out, RoS. Let’s explore more!

In Carton Wars game, the player’s objective is to be the last one standing on the battleground(named as cardboard-box arena). You will fight against other players in thrilling battle-royale mode. The battle lasts long for about five minutes. That’s very fast as compared to Garena Free Fire, Battlelands Royale, and PUBG Mobile.

IS IT ANOTHER BATTLELANDS ROYALE?

We have already a similar type of game on Google Play Store, named as Battlelands Royale. Both the game features top-down perspective view, cartoonish graphics, and fast-paced battles. However, Carton Wars come with a unique map, items, and characters. You can also enhance the character, explore its skills.

The graphics of the game are also good. You can also team up with friends and win the box-royale crown. All you will do is land on the best spot, loot the best guns, items before the enemy, and survive until last by taking wise decisions in real-time battles.

Carton Wars is soft-launched in above-mentioned countries. There is no release date yet announced. You can download it from here(Google Play Store). Its size is over 250 MB. As of now, the game has 4.8 ratings(26 reviews).

If you are looking for a fast-paced battle royale game that lasts only for a few minutes, then you should give it a try. Also, see – Best Battle Royale games for Android