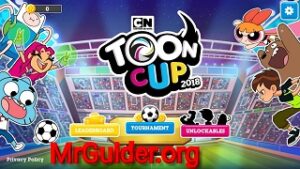 In Toon Cup 2018 game, the player can choose up to 3 team members for the match including one captain. As of now, it features tournament mode in which you battle against other teams.

The very first step you have to do is selecting the team, then 3 players for the match. That’s it. At the left side of the screen, use the joystick to navigate the characters on the ground.

And on the right side of the screen, there is a blue button; using it you can pass the ball to your team member or if the ball is in opponent’s side, use the blue button to tackle.

Scoring The Goal – In Toon Cup 2018 game, scoring a goal is quite easy; you just have to go close to the goalpost, hold down the blue button, then release when the pointer reaches the blue part.

During the match, watch out for the dropouts; power-ups like freeze, tiny size, shield, and many more. To win the match, score as many goals as you can(more than the opponent).

Earn coins by getting victories in the matches. Win by a huge margin to earn more coins. You can use coins to unlock new characters.

At the beginning of the game, most of the characters are locked. To unlock characters in Toon Cup 18 game, go to the main screen -> tap the unlockables option -> spend coins and unlock new characters. You can earn coins by playing the game.

There is also a practice match mode available that will help you to improve the skills.

All the characters have different stats; some characters are good in shot accuracy, some are very fast. Before you start the match, you have to pick the characters. You can check the attributes(speed, shot power, accuracy) of characters there.

Create a perfect team by selecting the best characters and win the match. I would recommend you to choose the characters with best speed attribute. Win matches and top the leaderboard. Don’t forget to pick the power-ups.

Toon Cup 2018 is an offline football game and you can download it – Here(Google Play Store). Also, see – Best football games for Android 2018

I would rate it 4/5 because the joystick control is not quite good. Overall, it’s a great fun-fast-paced game and you can unlock everything by playing the game. Monetization – It contains ads.