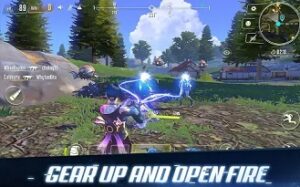 NetEase’s Cyber Hunter is now finally available to download from Google Play Store. The beta has started a few minutes ago and will end after seven days

Cyber Hunter game was available to download from Google Play Store since the start of the day, but the servers were not up. Now, all the servers are up and you can enjoy the adorable open world sandbox survival game on your Android device. The size of the game is around 1 GB and it comes with HD graphics. If you have a high-end device, then you should play it at the highest graphics settings to enjoy the best gameplay.

And as you know, last time Project Battle was up only for a few days. Now, renamed game Cyber Hunter will be in work until 26th October(6:00 EDT). We have not tried it on any emulator yet(on PC), but it works flawlessly on Android having 4 GB Or higher RAM. According to the Google Play Store’s description page, the game’s requirements are the following: –

If you don’t know what is it, then there is an app named CPU-Z, developed by CPUID developers. Download it from Google Play Store and it will tell you the device information including the OpenGL version in the system tab of the app.

Now, let’s talk about the game.

If you have ever played Fortnite or Fortcraft/Creative Destruction, then you can easily understand its mechanics. In the game, you will land on a beautiful map where you destroy almost everything to obtain the cube/crafting material. Using the cube, you can build as many structures as you can; watchtower, shield, fortress, ramps, and much more.

Your objective is to keep yourself alive until last and be the last one on the battleground. Only crafting the structures is not good. A number of tactics involved in this game; for example; choose a good landing spot, make decisions quick and accurate, don’t rush or camp in buildings, keep an eye everywhere and be aware from snipers.

The safe zone shrinks as the game continuous. The number of alive players also get reduced as time passes. Your heart’s pumping rate will increase when there are only two left and you don’t know where the hell the enemy is hiding. The crafting system of Cyber Hunter is too good.

Graphics – There is no word to say, its graphics are excellent. Controls: – If you have ever played PUBG mobile, then it would be easy for you to the aim, shooting controls. If you are playing this type of game for the first time, then you will need to master the controls because there is no slot for poor controlling skills.

The game also features many sub-machine guns, assault rifles, sniper rifles. Additionally, you have grenades, hand-cannons, heavy weapons. In short, there is no shortage of weapons.

So that’s all about the Cyber Hunter game.