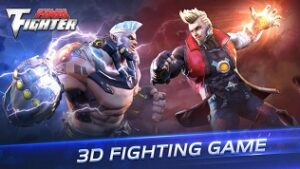 Ruby Peng has just released a brand new fighting game for Android, Final Fighter. Here’s all you need to know about this classic fighting game

If you are one of them who loves playing fighting games on mobile, then we have got covered a new game Final Fighter that you should try. Final Fighter is a brand new 3D fighting game(Free, Online) for Android by Ruby Peng. In the game, you play as a fighter/champion and fight against other players/champions. And Yeah! They all have special skills & abilities to knock down powerful fighters. Let’s take a look at Final Fighter game overview: –

This 3D fighting game features a wide range of game modes such as story mode, real-time battles, challenge, arena, and many more. You start with the story mode and fight against the champions to unlock rest locked modes. The game’s mechanics are quite easy to understand; If you have ever played Tekken, then you can easily master the controls.

There is a joystick controller on the bottom-left side of the screen and on the right side, there are combat controls; attack, skills, and more. You can activate special moves using the joystick and by tapping attack button in a row.

All you need to do is knock down the opponent; perform combos, strike skills, special moves, and dodge the enemy attacks to avoid the hits. After the fight, collect the rewards, earn EXP, level up, and power up the character by training, enhancing, and upgrading skills.

Gameplay; It is not boring. You have full control over the character, there is no auto-system, and the game also has a variety of the game modes.

Final Fighter game’s controls are quite good; it’s easy to control the character. The special moves can be activated easily with the joystick controls. Graphics; The graphics of Final Fighter game are excellent.

Gamepad? As per the current version, the game does not support the gamepad. However, it is confirmed that in upcoming updates, they will add the gamepad support.

Along with a bunch of game modes, Final Fighters game also features a wide range of characters. All have different stats, skills, playing style, and attributes.